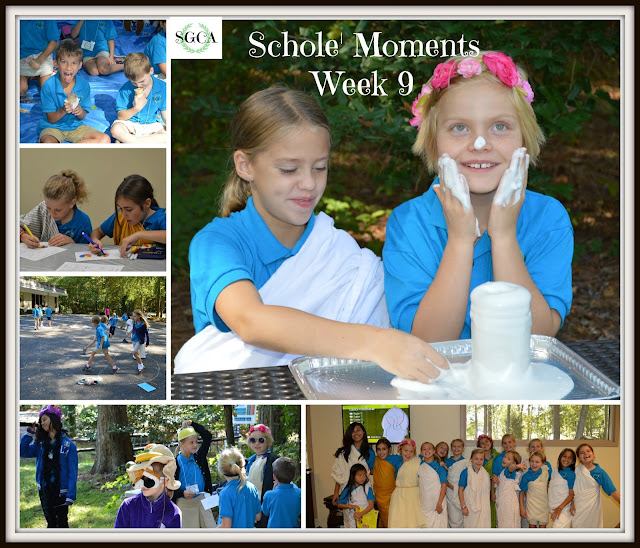 Morning Time
Our morning time focus was on the virtue of patience this week.  We read a story about a familiar missionary, that we introduced during our humility focus a previous week; Florence Nightingale.  This time we read about her experience serving in Europe, where she faced much opposition from our own military, and required great patience to endure. 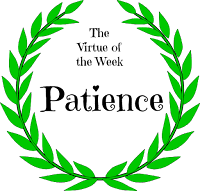 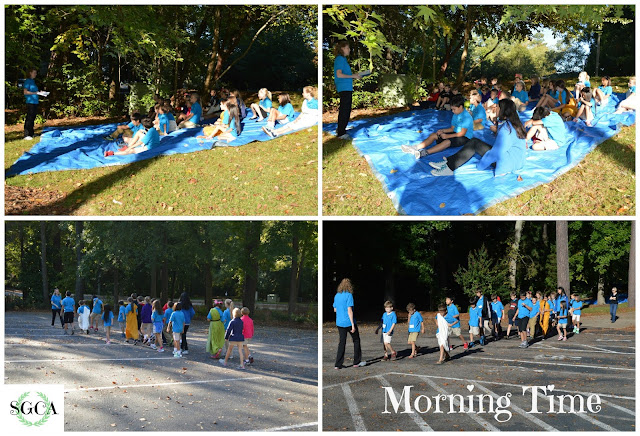 We are continuing in the reading of various ancient cultures' rendition of what we all would call "Cinderella".  Today's focus was on a story set in China called Yeh-Shen.  The kids continued to work through their understanding of story development through the use of a story board.  The use of the concept "same but different", by repeating the Cinderella theme in different cultures, is helpful for the kids to be able to pick out the elements in a story and truly master the story board.  The story board is from the fantastic curriculum Teaching the Classics, which I highly recommend. 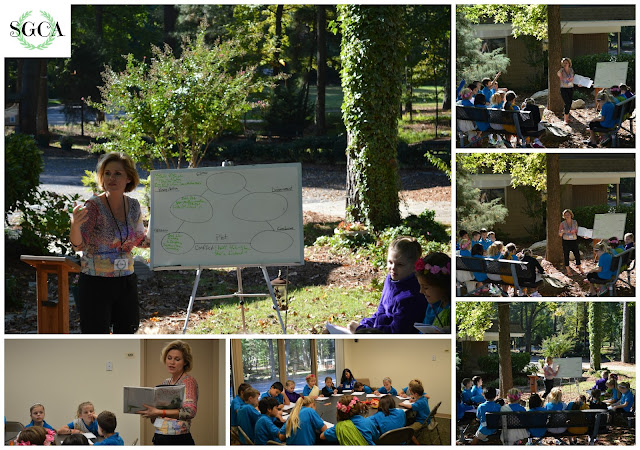 Fine Arts
Today's fine art focus was on the color wheel.  The students were instructed how to create a color wheel and then how to blend color to make new colors, as well as hatching, dots, and shading.  We are using Barry Stebbing's curriculum and practice cards for this. 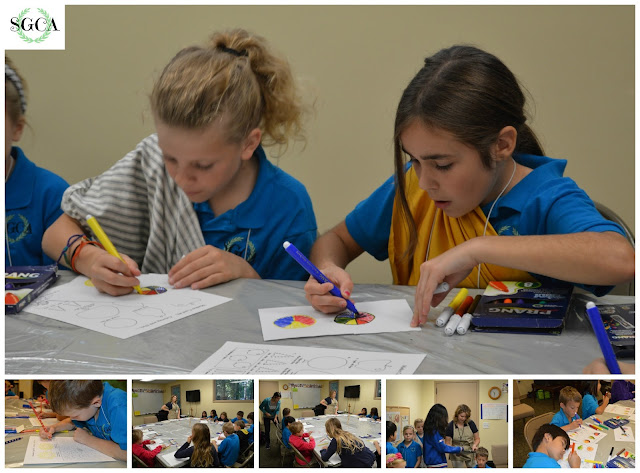 Schole' Lunch
We had special guests this week from Rhapsody Arts Studio located in Cary, NC.  They are a Christian owned and operated studio for dance, drama, music and visual arts.  They brought some costumes and a fun game for the kids to play to help them get the feel for a drama class.  Each of the students took turns putting on a costume of their choice and then they were given a card with a particular emotion or action to act out.  They were then given a chance to interact with one another and see if they could guess it. 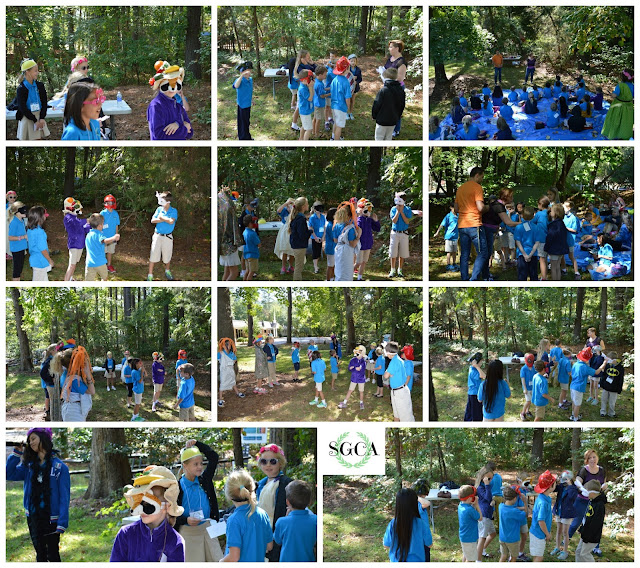 They also had the reward of getting an ice cream cone for completing the Love In Action challenge I issued at the end of our love virtue focus.  The kids all did at least 10 of the action items on the challenge sheet by the date assigned, so we celebrated their service of love with something they all love - ice cream cones!

We also introduced a new game on the playground called hopping chicken.  This game is from China, which tied into our Yeh-Shen story book reading earlier.  The game is played by having 9 sticks that are placed approximately 9" apart in a row.  The kids then took turns use one foot to hop over each stick to the last stick, turning around, picking up that stick and then bringing it back to the starting line.  They had to hop on one foot, all without putting down their second foot or stepping on a stick, both directions.  If they were successful, they started again by picking up the next stick and so on, until all of them were collected. 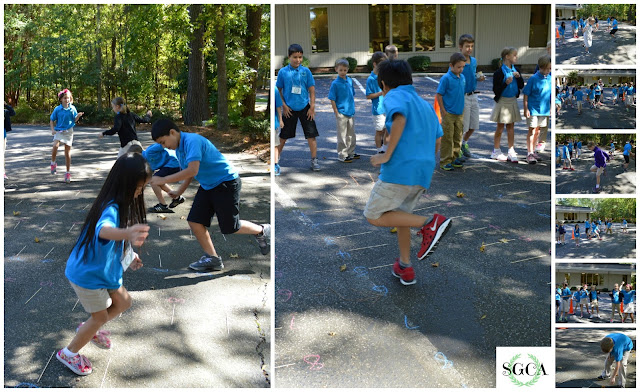 Science
Our enthusiasm for science bubbled over this week as we explored Democritus' formulation of an atomic theory of the universe, around 400 B.C.  The kids did three different experiments today.  The first was to take photographs and using a magnifying glass, they carefully examined their photograph to see how it was made up of lots of small dots.  This was tied into Democritus' theory regarding atoms.  The kids then did a bubbling over experiment of separating hydrogen from oxygen and then watched as pepper moved up and down in hot water vs. staying still in cold water.  To end the class, the students drew atoms on the blacktop.  The history of Democritus and his theories, correct and incorrect, were discussed throughout.  We continue to use Berean Builder's Science in the Ancient World as our source text. 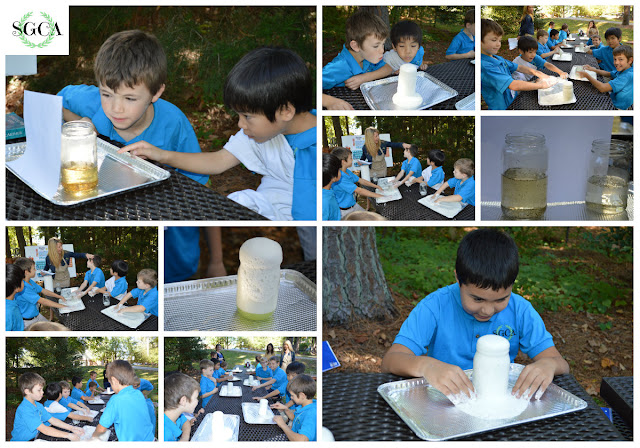 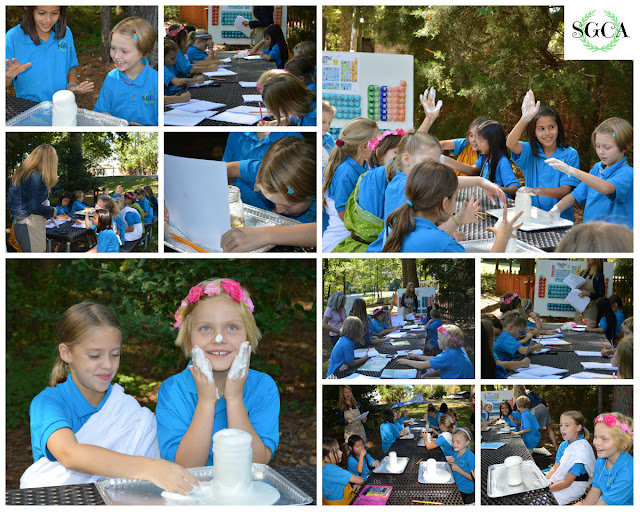 Latin
We had a celebration in Latin today.  The kids dressed up in toga's and then we served them some foods they might have experienced back in ancient Greece.  They were working on learning vocabulary words related to celebrations - so it seemed like a perfect time to do it! 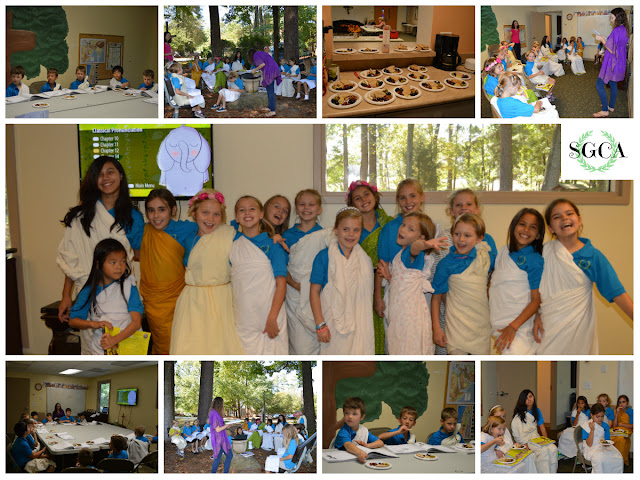 Math
Our time in math was spent outdoors.  The kids drew large circles on the blacktop and then they divided them into fractions with numbers from 0-9.  The kids then walked around their circle until instructed to stop.  Wherever they stopped they were to add or multiply (depending on grade) and see who got the highest number - competing against those with the same operations each time. 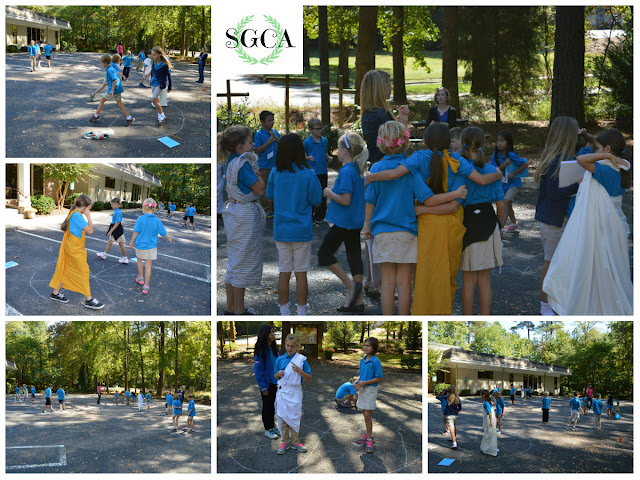 All in all, we had a beautiful day of sunshine and joyful learning about all God's creation! 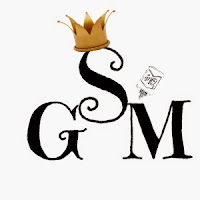