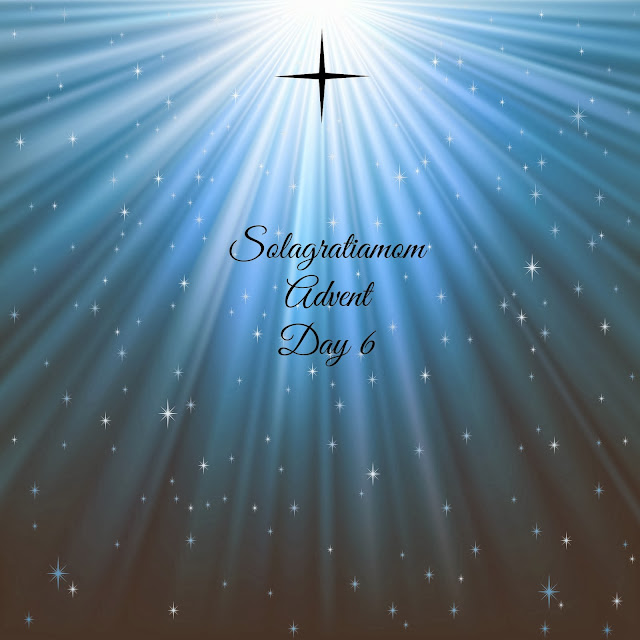 "And there were shepherds living out in the fields nearby, keeping watch over their flocks at night.  An angel of the Lord appeared to them, and the glory of the Lord shone around them, and they were terrified.  But the angel said to them, “Do not be afraid. I bring you good news that will cause great joy for all the people.  Today in the town of David a Savior has been born to you; he is the Messiah, the Lord.  This will be a sign to you: You will find a baby wrapped in cloths and lying in a manger.”  Suddenly a great company of the heavenly host appeared with the angel, praising God and saying,
“Glory to God in the highest heaven,
and on earth peace to those on whom his favor rests.”
When the angels had left them and gone into heaven, the shepherds said to one another, “Let’s go to Bethlehem and see this thing that has happened, which the Lord has told us about.”  Luke 2:8-15 (bolding is mine)

I thought doing a craft on angels and taking a look at the created beings who announced the birth of Christ was in order for today's day 6 of Advent.

God chose angels to announce to Mary that she would carry the Savior of the World (Luke 19:28-44), and an angel was sent to convince Joseph to take her as his wife still, a great company of angels were sent to proclaim the birth of Jesus to the shepherds, and angels were sent to minister to Jesus himself during his ministry on earth!  Angels are important facilitators of God's work of salvation for man and we are told in the Scriptures that they rejoice in it.  There are numerous examples in the Bible of angels performing the will of God, which is what they were created to do.  We all know the name of that fallen angel that set the need for a plan of salvation into motion.  So our lives both now and evermore, are all part of this intertwined plan God has, involving angels and man.  In the end God's glory is revealed in it's fullness as His chosen people worship Him with the angels for all of eternity (Revelation Chapter 5).

So I decided to do a personal study taking a closer look in the Scriptures at what God's word tells us about angels.  Angels are referenced in the Bible 273 different times.  I won't site all those references but I will share with you an overview of what I believe are some of the main concepts I took away as I studied about them... 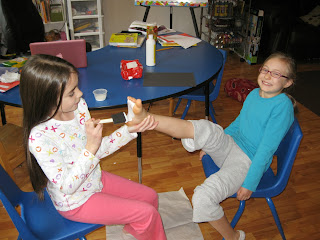 First paint feet - this is fun and silly!  Kids love it - it's tickly, goopy and a great sensory activity!  I let them do each other's feet because that was even more fun than me doing it for them! 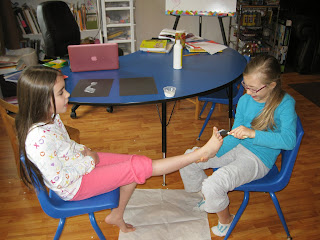 Then press their foot onto the paper.  The heel will be the head and the toes will be the angels feet. 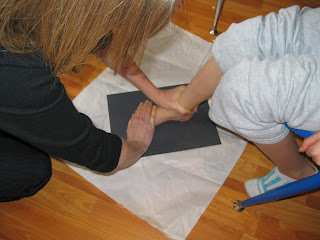 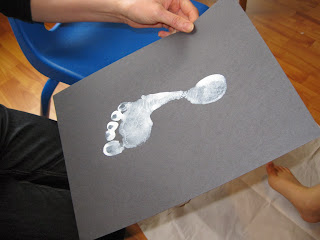 Next paint their hands one at a time and press them onto the paper about where the arch of the foot is seen.  These will become their wings.  It works best to have them keep their fingers close together or you can overlap the handprints if they like.  We did it both ways. 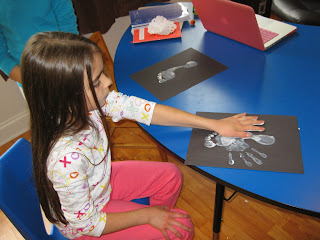 We took white paint and filled in the "body" of the angel a little better (but you don't have to do that).  Next take black paint with a fine paintbrush and have them make dots for eyes and a nose.  Then they can make a big singing oval mouth praising God!  :) 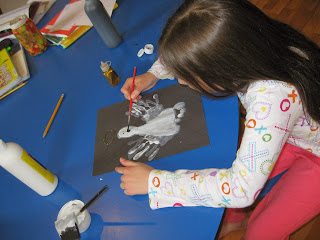 Then take glitter glue and have them make the angel's halo and any stars they want to add. 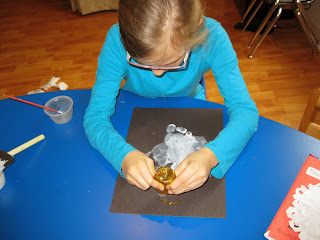 Next we took hot glue and put it around the head and I gave them gold curled ribbon to be the angels hair. 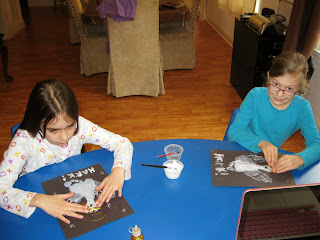 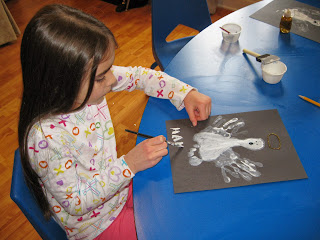 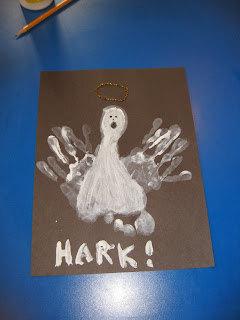 Have a purposeful, blessed Day 6 Advent!