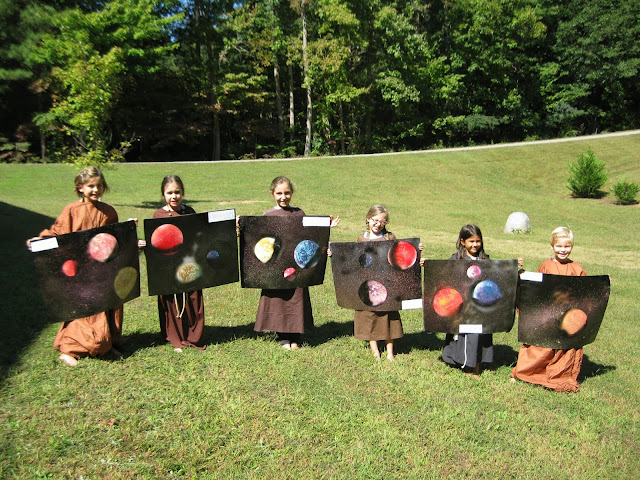 Wonderful Wednesday this week consisted of dressing up for history, as the Monk -Martin Luther! 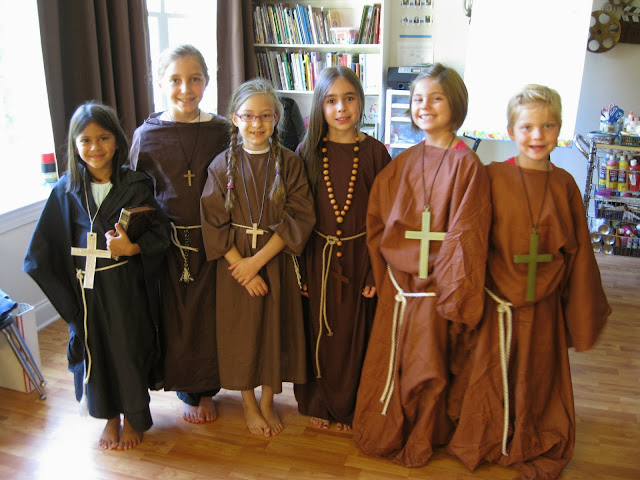 We started with the lapbooks and then once we finished those we moved on to our big project!  Today we did a project that was about stars.  I had a few books that I referenced and I had written some interesting facts that would hopefully provoke and intrigue the kids to read and learn more about stars. 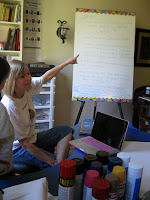 Some of the cool facts that we talked about were; the rating and colors for determining how hot a star was, the speed with which light travels verses the speed of a rocket ship (186,000 vs. 5,000), the fact that many of the names of stars are in Latin (so keep studying that Latin) as well as Greek and Aramaic, and the different sky-views of stars (constellations) that change with the seasons.  We discussed God's use of mathematical calculations to create and sustain the Universe.  We discussed how math shows us the consistency of God and how predictably and reliably He has ordered and continues to sustain, the Universe.  We discussed the calculations for how a star rises and sets 4 minutes earlier each day.  We also discussed the star Polaris and how that further shows us the sustaining, predictable nature of God, it is the only star that remains in it's position all year round - it's always North. We tied that into the Bible and how the North star is this very star from the story of Jesus' birth.

Next we moved on to our Star project.  This turned out to be a Solagratiamom favorite (next to our Feudal System Diorama).  The kids were very creative and did a fantastic job!  These were framable projects for sure!  You'd be surprised at the quality of what they can create with a few simple techniques - it really was a pretty easy project compared to many. 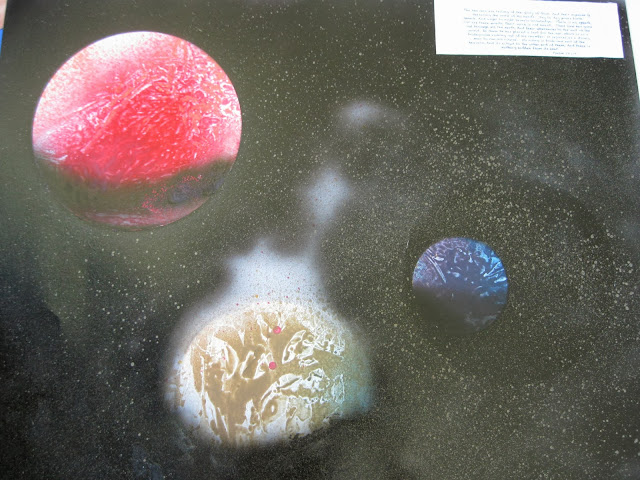 The first thing we did was look at various pictures online (the link was included in the WW Teaching Plan) - so the kids could get a variety of ideas and perspectives on how stars in the galaxies look.  We then went outside for this one since it involved spray paint!

I had a variety of glossy colors like pink, red, blue, purple, gold and yellow.  They were each given a white poster board and were told to use the glossy side to paint on.  They each used varying sized round shapes (I had bowls, tin foil pans and tops) and they laid out where their stars would be placed on their poster board.  Then they removed them and spray painted their color combinations and blotted them with newspaper.  (Quickly spray the color combinations for one star at a time and quickly lay newspaper over them for about 5 second then remove it to blot the design.)  The end result of this stage is below.... 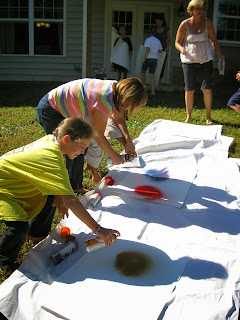 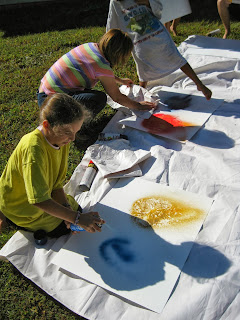 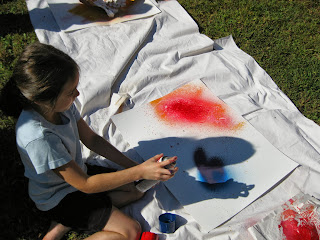 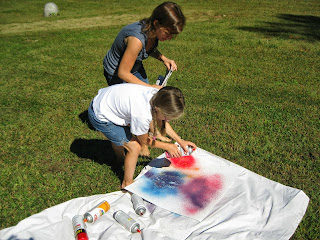 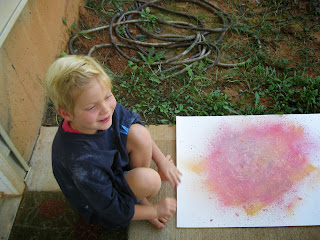 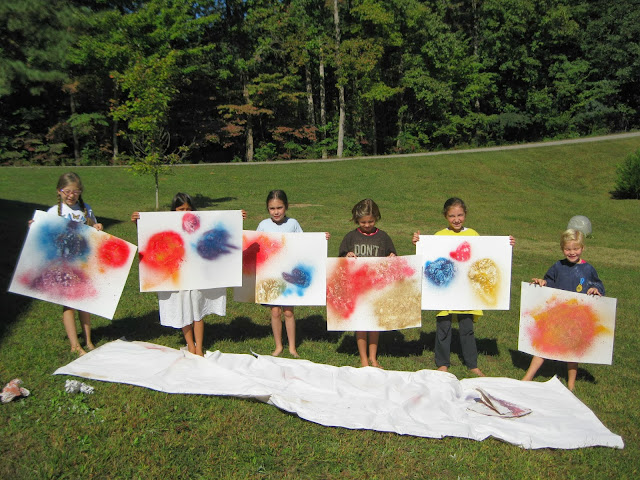 Once your "stars" have been spayed and blotted, then you decide which side your inferred Sun will be facing your stars.  The opposite side of that will be where you will paint your shadow for each star.  You do this by covering the stars all except a parenthesis shaped space on one star at a time, where you will lightly spray your glossy black paint across it a few times to create the "shadow".  It looks like this when you're done... 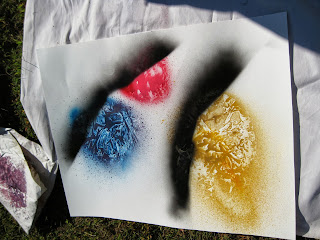 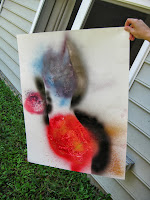 Once you have spayed your shadows, then you get your various sized round objects to create the actual stars.  You lay them on what you have painted (once it's dry to the touch) ensuring that you have a good portion of the "shadow" included in that diameter.  Like below.... 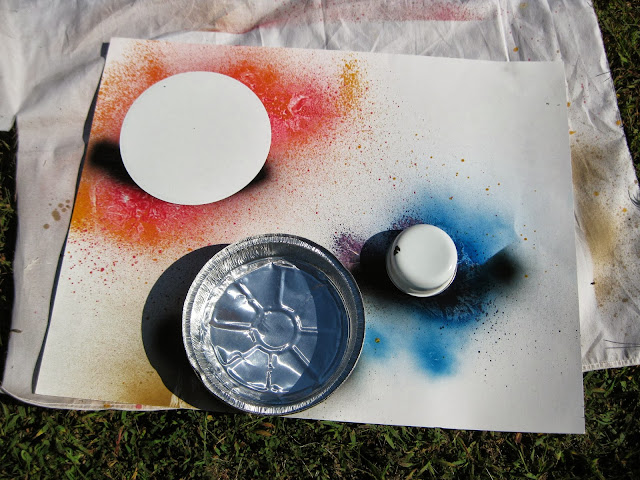 Now you will spray paint the area all around these round shapes glossy black to cover the paper.  When you remove them you will have your stars!  Like this.... 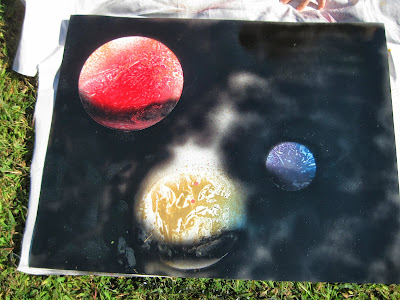 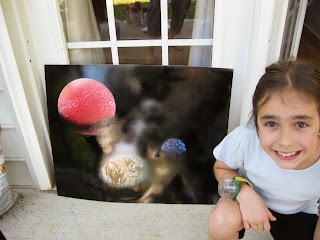 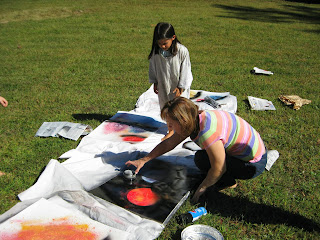 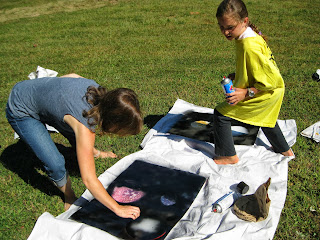 Once you are done painting your black "space" background, leave your circled items covering your stars still and then take the star color you've chosen and spray it a good ways away from the picture so the droplets will fall all over it and create smaller "stars" in the background.  It will give it a "galaxy" look.  Like this..... 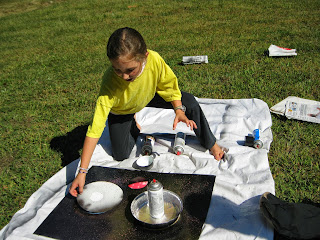 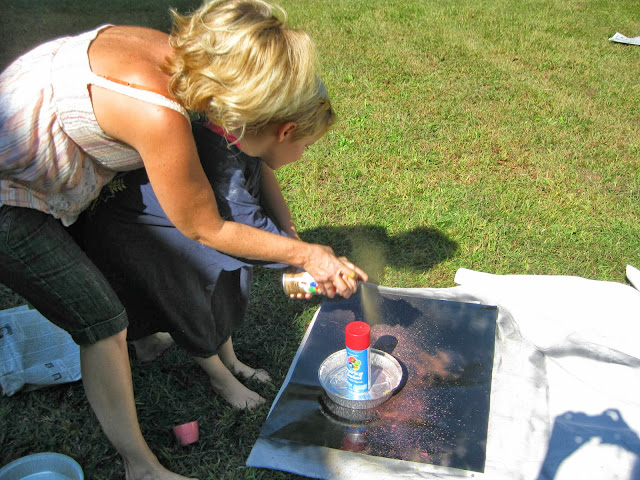 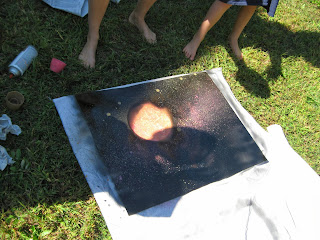 The last step was to glue a Psalm onto the poster board - which makes it for me...

"The heavens are telling of the glory of God;
And their expanse is declaring the work of His hands.
2 Day to day pours forth speech,
And night to night reveals knowledge.
3 There is no speech, nor are there words;
Their voice is not heard.
4 Their line has gone out through all the earth,
And their utterances to the end of the world.
In them He has placed a tent for the sun,
5 Which is as a bridegroom coming out of his chamber;
It rejoices as a strong man to run his course.
6 Its rising is from one end of the heavens,
And its circuit to the other end of them;

We talked about how the Psalmist would have had no way to know any of those Truths that we now know to be fact (except by revelation of God himself).  We know that the Sun is the center of our Universe and it's gravitational pull extends from it's North Pole all the way around Pluto and back to it's South Pole!  The consistency of the Universe declares for us that our God is consistent and never changing.  The mathematical principles He has put into place give us a glimpse into His mind and sustaining power holding it all together.  His creation sings His praises - man is without excuse.

The end result is so cool!  Pretty easy for a pretty fabulous result!  It didn't take very long either.  If one person did it from start to finish you wouldn't need but maybe an hour (that would include drying times in between steps).  :) 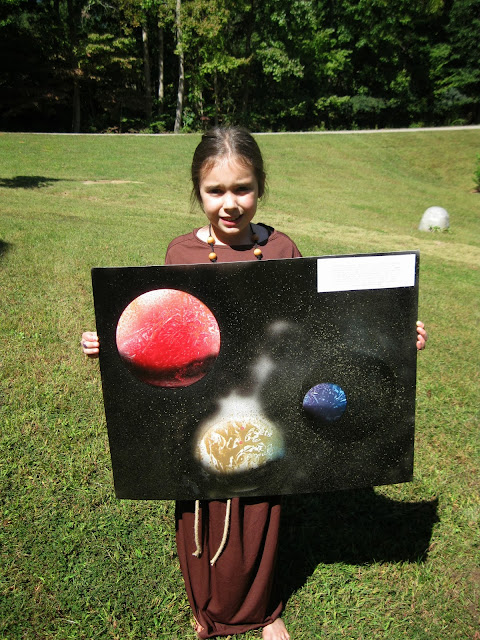 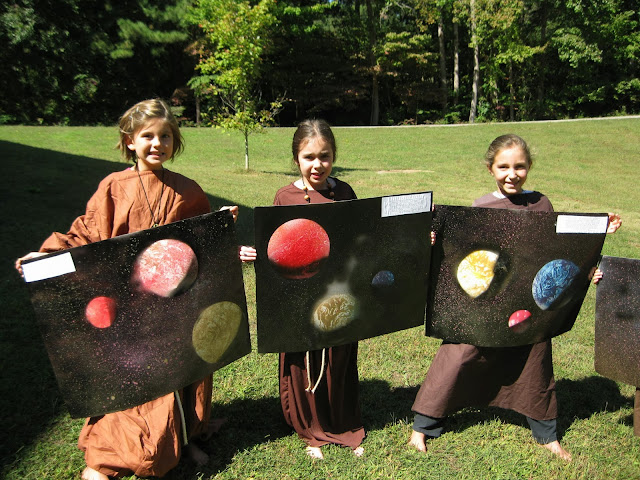 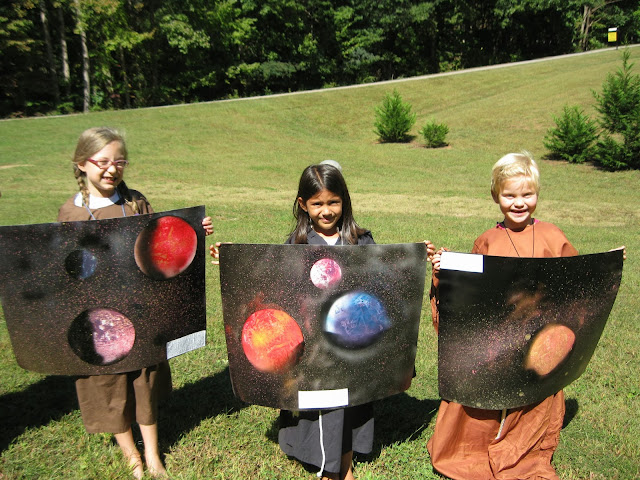