So what can you get these days for $25 that will really be something you'd talk about for a long time afterwards?  An inexpensive dinner for two?  A pair of movie tickets?  How about an entire weekend Science Retreat including accommodations, meals and activities???  Well, thanks to the generous heart of Mr. Greg Landry that's just what you can get for $25 at Landry Academy!

A few friends sat in my basement school room chit chatting post Wonderful Wednesday one week in May, when one of us received a text from a friend "Hurry up and sign up for Landry Academy Retreat!  They just opened up the sign ups.  It's great and it fills up fast!" and a website attached.  None of us had heard of it before.  We quickly jumped on the link and although we thought it sounded too good to be true for the price, we quickly decided that we would sign up to go the following October in Black Mountain, NC.  We had no idea what we just signed up for, but when someone says retreat, mountains of NC in October and you're in May of your school year - does it really matter?  You sign up!  So we did.

I had almost forgotten about signing up for this retreat.  A lot happens between May and October.  However, October did come and we all remembered and plans were laid to leave little ones behind and carpool together to the mountains of NC for this "retreat" experience.   All of us attempted to contact Landry to find out what the "agenda" was for the weekend.  We never received any details about the trip aside from an e-mail two weeks out reminding us of the retreat and directions to get there with an arrival time to be there.  Three women - all planners and driven by well laid out details - this was a little daunting.  We had no idea what to expect.

We arrived at the earlier time they allowed - we wanted the scoop and from the e-mail, we saw that there would be a need to "claim" your bunking quarters.  Upon arrival we went to the main building where everyone was to check in.  We received a badge with a dinner sticker that let you eat for all your meals free and a retreat T-shirt you picked up upon registration.  You weren't given an "agenda" still but told to go to another building after dinner and given those two times.  Then you were given a map and told you could go to any of the pre-determined buildings to claim your sleeping quarters.  We took off trying to find a suitable place to fit us all together.  The first building was older and smelled a bit musty so we quickly ran up to the next building.  This one was renovated and had hardwood floors, so it was much more suited to two of our allergy laden folks (me being one of them) and it had a refrigerator which was needed for all my food I had to bring because they were unable to accomodate food allergies.

It felt a little frantic as we searched for a room that would allow all of us to bunk together.  There was a large group there who seemed more familiar with this process and they were grabbing rooms and beds fast, so we had to kick it into gear in order to be able to get a spot!  We found a room finally, after two women kindly switched rooms with us, allowing us to have a bottom full sized bed enabling us to not be split up and bunk together.  I slept on the top bunk!  I haven't done that since I was a teenager!  :)  There was a bathroom that several of the rooms shared - with clean linens in a laundry room, that were there for the taking as needed and the sheets were on the beds. 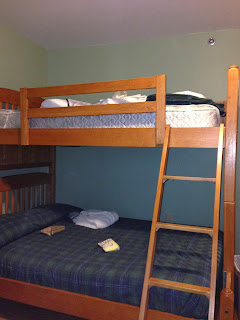 Once our claim was staked for a room, we then went down to the main building where we checked in for a cafeteria style meal.  I brought my own food and just took it along with me.  After eating we made our way to the assigned building, where all the scheduled activities would be taking place.  Once there, we arrived to several tables filled with various science related materials, books, experiment kits etc.  An area with hot chocolate, tea and coffee and several large filled containers of chocolate for the eating,  spread throughout the area.  We made our way to a table up front and settled in to see what this was all about.  Mr. Landry introduced himself and let us know that there would not be an "agenda" given to us Moms.  (I think a moment of panic set in for most of the homeschooling moms there.  LOL  It appears by nature most moms that homeschool like to have things under control and scheduled out.)  He said that we would be told where to be and what time to be there - that was the agenda :).  We were free to attend any or all of the scheduled events or we could walk the campus grounds, relax at the dorm or whatever else we'd like.  It was foreign to just go with the flow - especially when you're the one directing the flow most of the time!  He further explained the purpose of this weekend was to help us learn how to better teach science to our kids and to bless Homeschool Moms.  They had home schooled their children and knew the pressures and stresses along with the blessings of homeschooling. 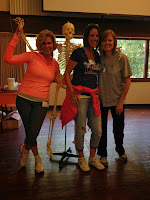 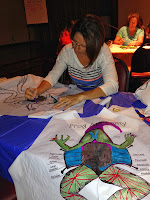 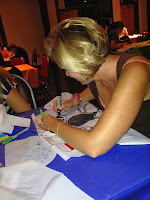 We were told that Saturday would consist of all day experiments of various kinds.  We also would be having a contest to win "Sammy" the Skeleton.  The contest consisted of coloring or decorating however you saw fit, the frog anatomy apron that we were all given and then later on the day Saturday - all of us voted to find the winner.  We were told to go to those tables filled with science related stuff we saw when we came in and peruse through it and keep in mind anything you liked because the next day we would be able to come up and just pick whatever we liked off the table to take home upon his cue! 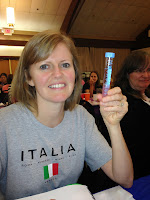 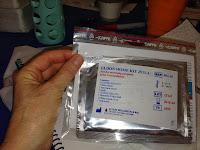 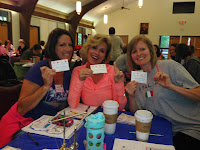 Saturday's experiments consisted of blood typing, DNA, Genetics PTC paper, dissections of a rat and goat uterus.  I stood at a distance on the rat and went for a nature walk during the goats!  LOL  I can handle human things better than animals or even parts better than the whole.  Like I would sooner dissect an eyeball or a heart, rather than a rat.  :)- 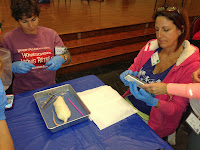 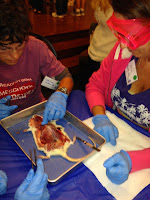 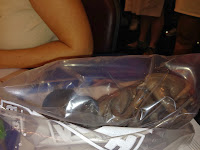 Sunday was a time of worship with a relevant message and then a personal testimony and encouragement offered by a staff person of Landry Academy.  The weekend wrapped up with lunch and then heading back home.

I personally had never heard of Landry Academy, until that text urging us to sign up for this retreat.  Since that text alert, I have spent some time on their website.  I feel it is a worthwhile venture to jump online and see what they have to offer.

In essence, Mr. Landry has developed a Christ centered online learning environment, where kids in 4th-12th grades can take a variety of online classes in several standard subject areas ranging from Art to Science, taught by experts in those offered fields.  They also offer unique electives.  It's difficult to find teachers that have a Christian Worldview when it comes to subject areas such as Science - so I applaud Mr. Landry's efforts greatly.  Mr. Landry being a previous Science Professor and Christian, has both a passion for science and people and it shows in all he does and offers.  Landry offers two day lab intensives and some really neat family trips such as a snow tubing family science weekend or white water rafting family science weekend.  They also do neat Mission Trips where abroad education is combined with ministry.  Lastly, they offer week long Christian Camps for 8th-12th grade students.

If you'd be interested in checking them out - you can find them at www.landryacademy.com .

Email ThisBlogThis!Share to TwitterShare to FacebookShare to Pinterest
Labels: Reviews