How to Start Young Kids Drawing the U.S. 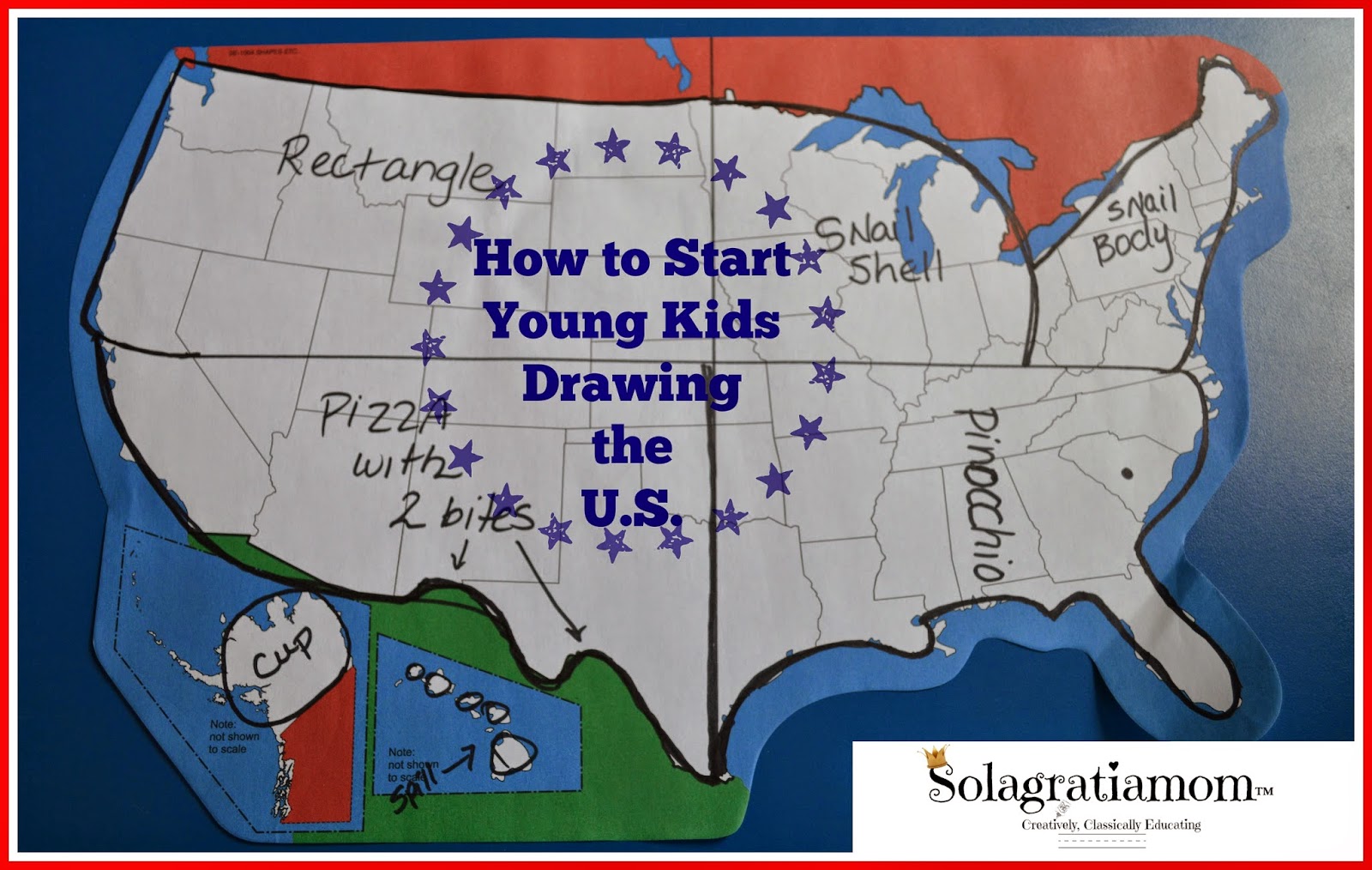 I wanted to begin to teach my daughter how to draw the United States.  She looked at the map with all it's squiggly shapes and jets in and out and didn't seem too keen on even starting!  The outline map seemed tedious to her at this point - so I put it away and took a new approach.   I knew I had to come up with a simplified way of having her see the map to get her engaged.  So we broke it down into four sections and then came up with things we could "see" or "imagine" in each section that would help her remember some of the bigger features to that section and how to draw it.  Here is what we came up with.... 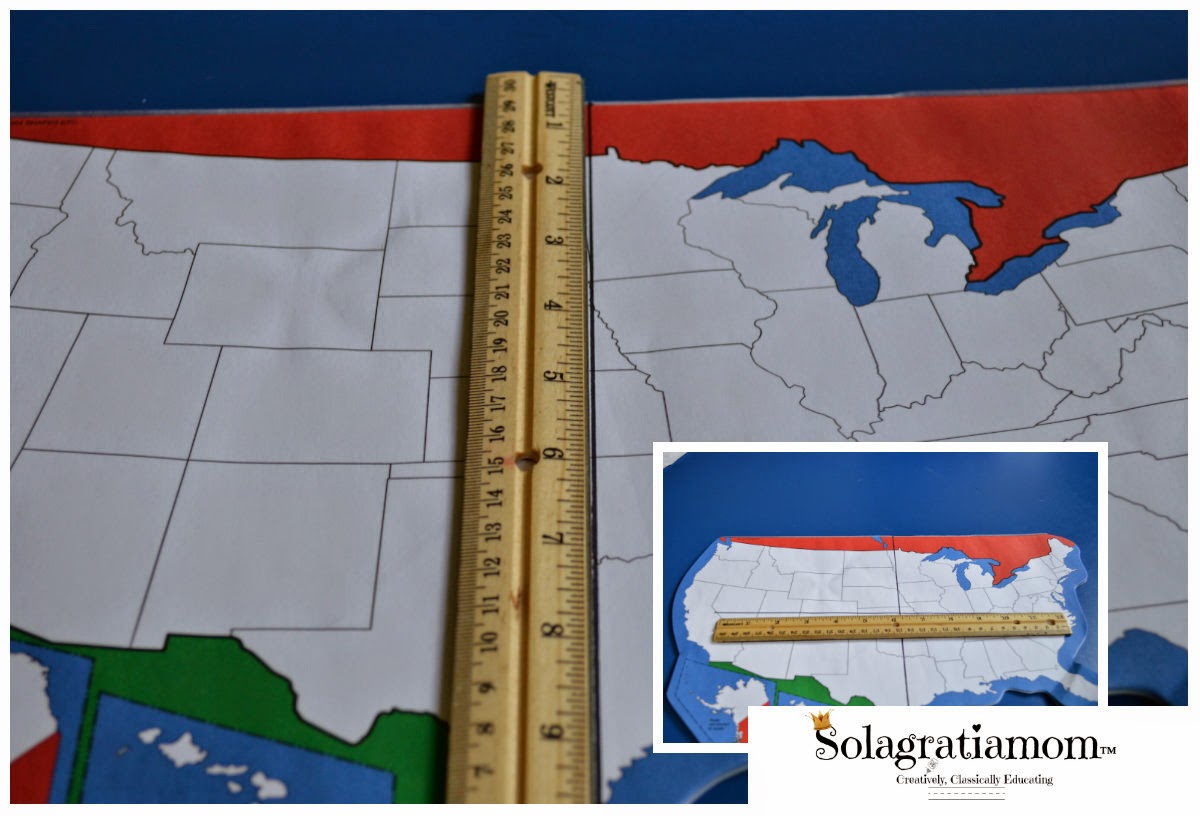 I used a tear off United States sheet I had from previous cycle 3 study and a sharpie pen with ruler to quarter off the US map for us.  You could easily use a dry erase map of the US or any other map of the US you have, that you can take a sharpie or dry erase marker to.  I had my daughter take her piece of paper and fold it into quarters.  (Just folding it in half and then in half again.)  Then she opened it up and had four sections to work with for drawing her map. 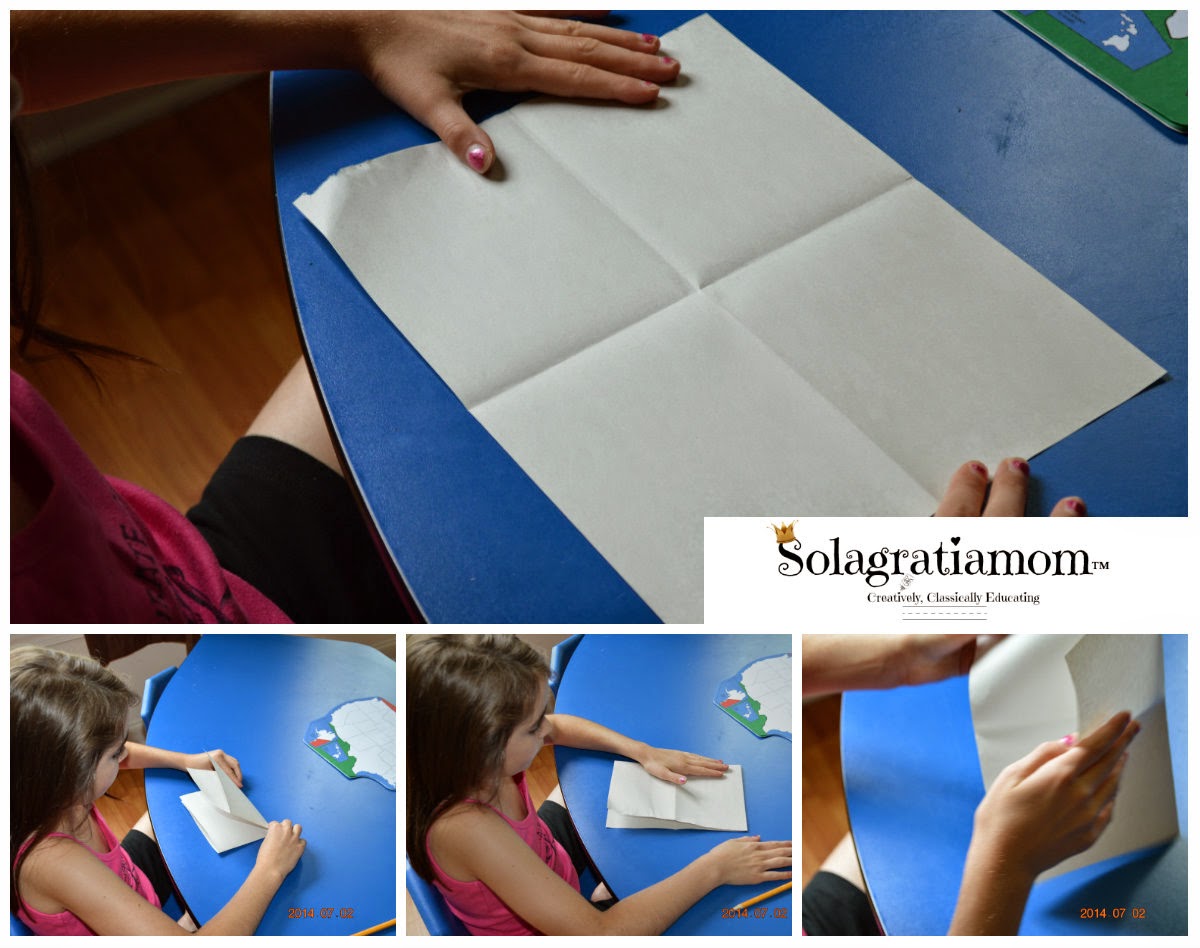 I would first draw what she saw on my map for her to copy.  Then she would look at my image and draw it on her paper in the correct quarter.  We would look at each section and talk about what we could see shape or image wise, on each quarter.  I would let her decide which idea she liked best for us to use. 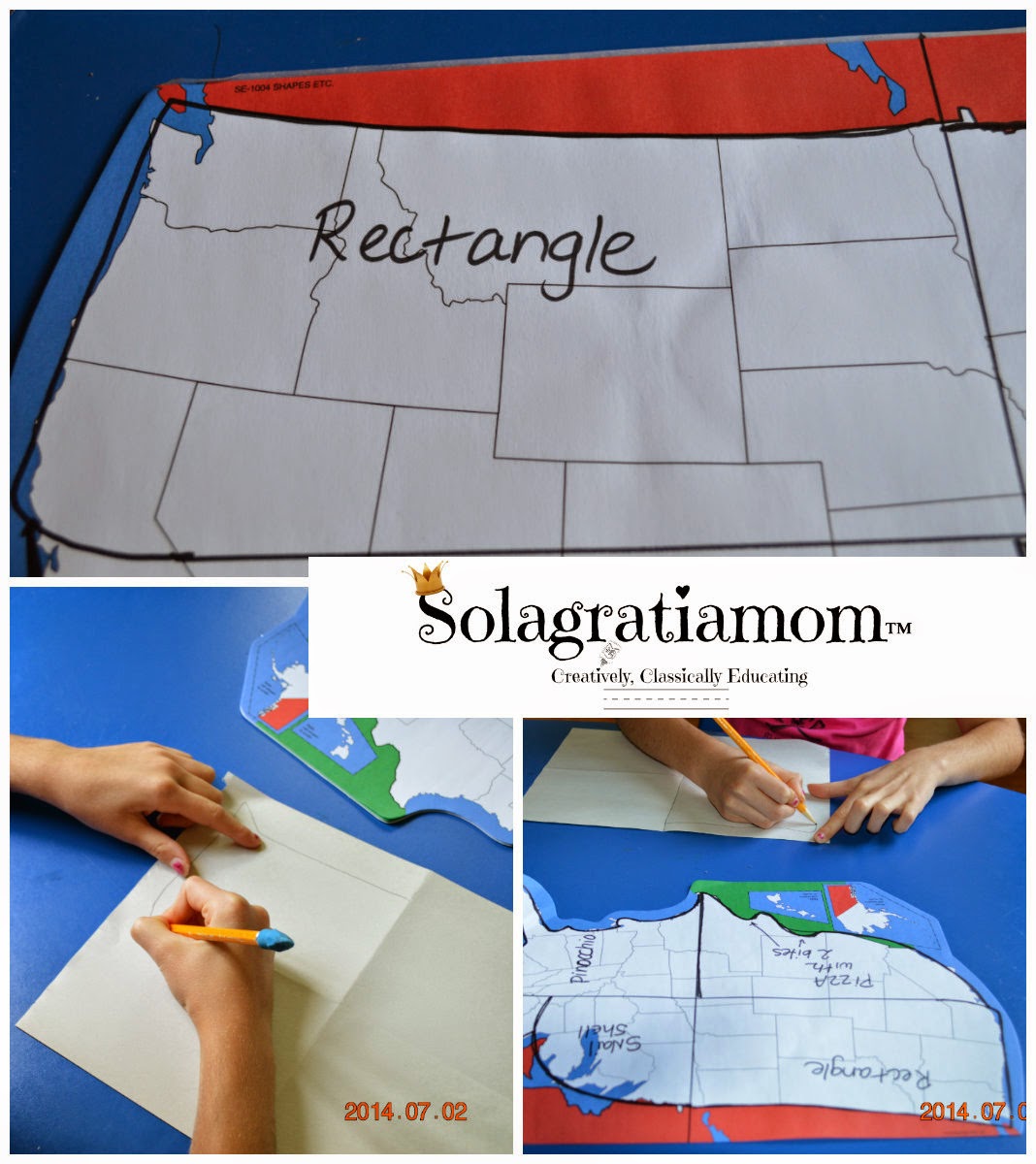 The right side of the map was a little more challenging and required us to use our imagination more to see something on that side.  We started with the top right and decided that it could be drawn like a "snail shell and snail body sticking out" as my daughter put it. 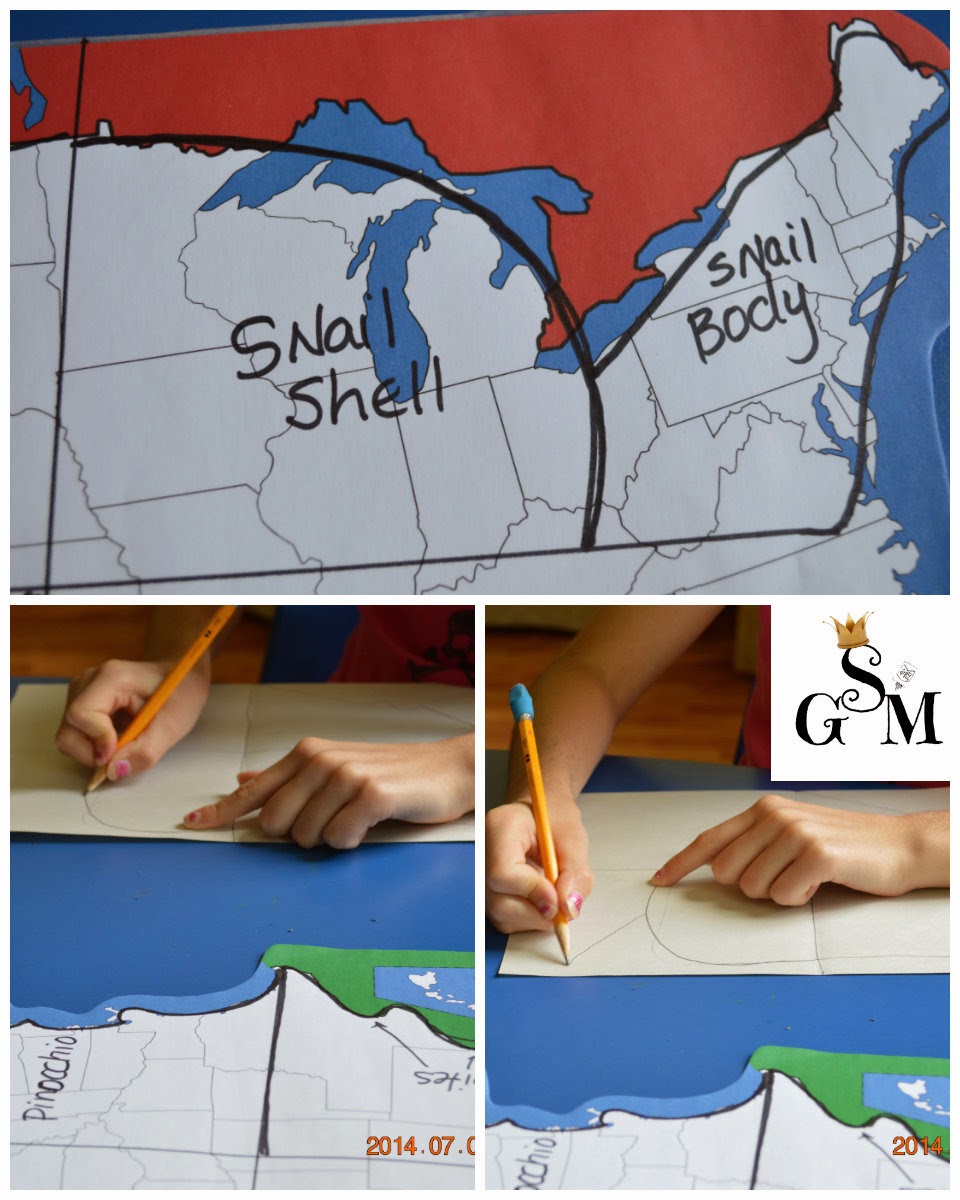 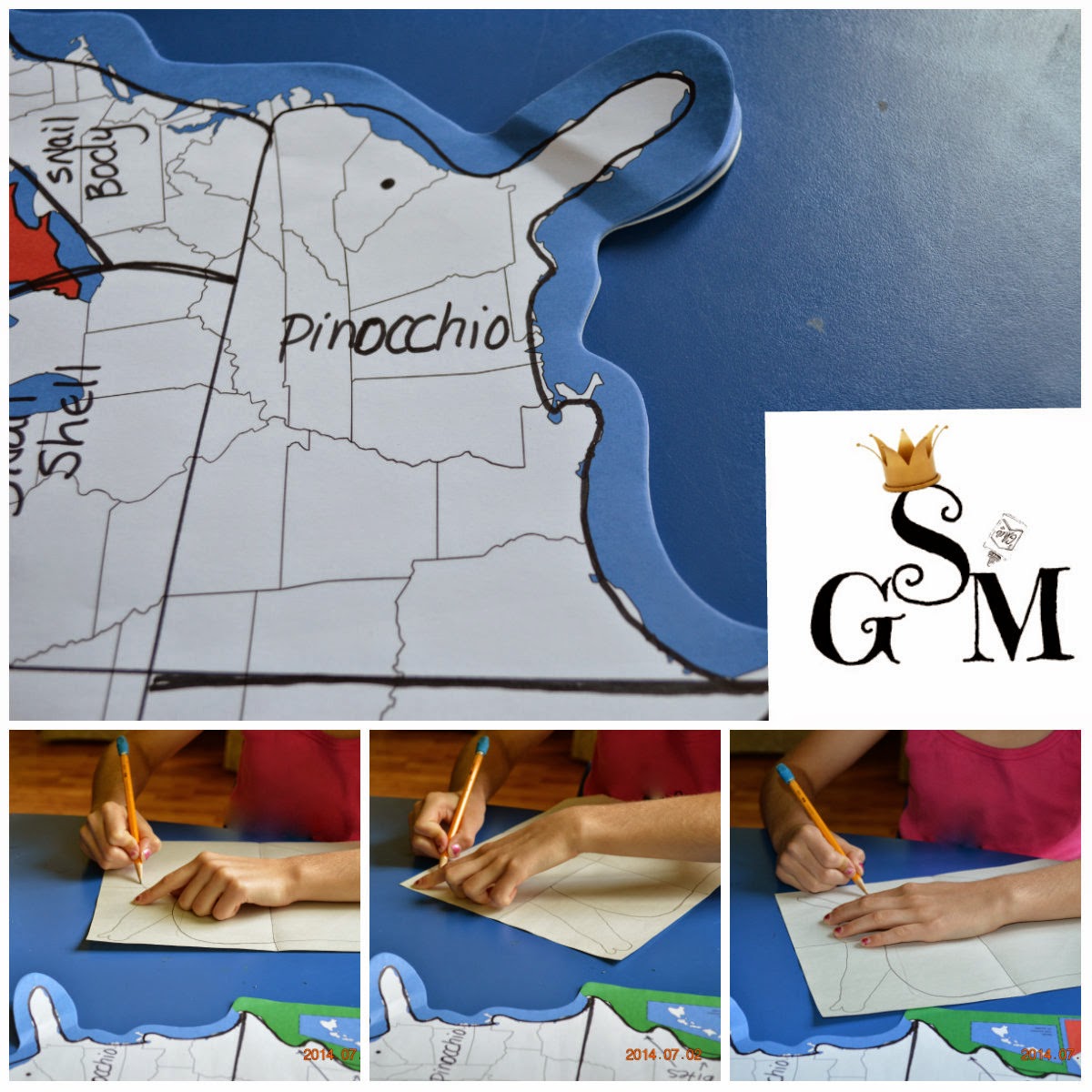 We added a "cup" for Alaska and some "spills" at the end for the Island's in Hawaii! 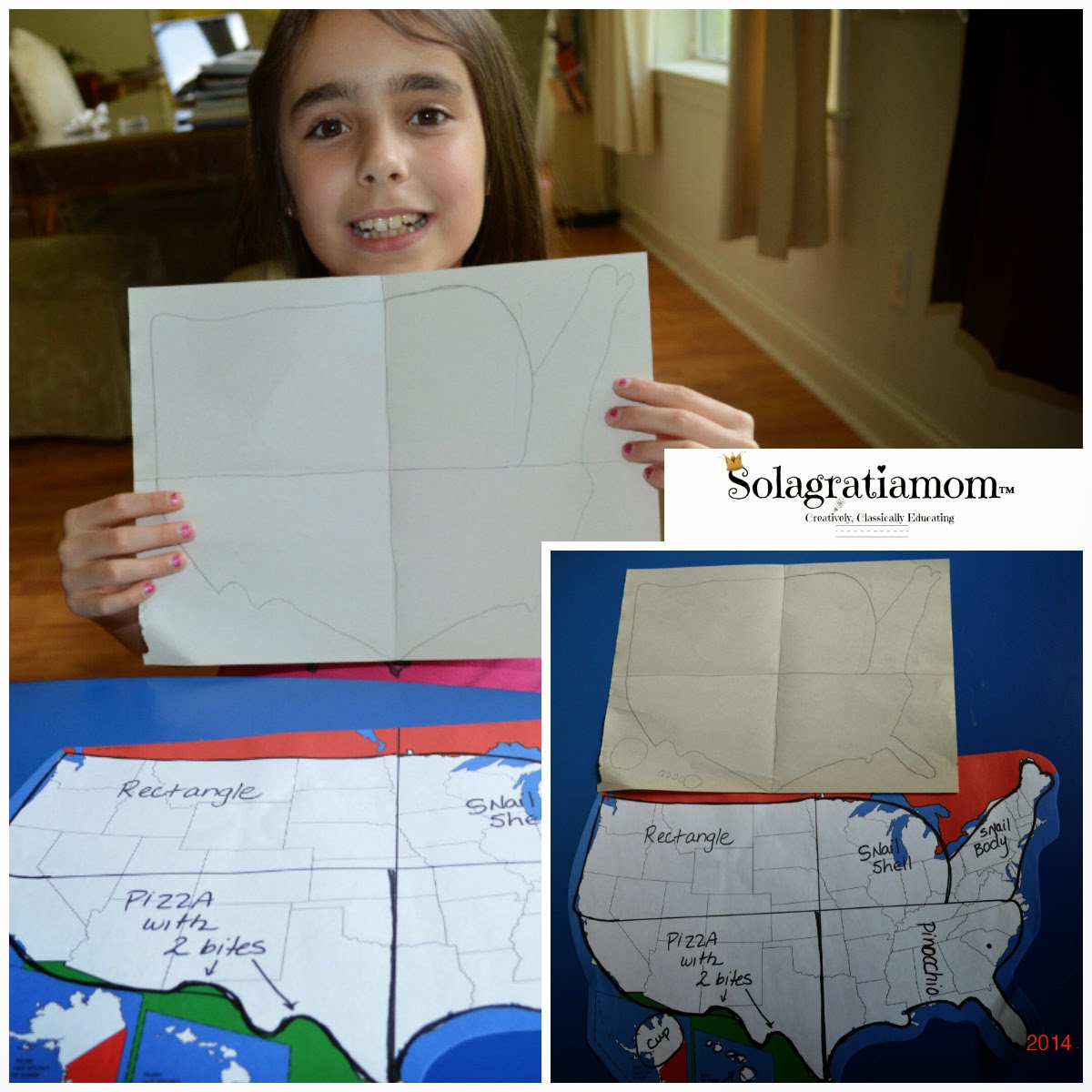 It was fun to take the map and break it down with our imaginations.  It helped my daughter feel like drawing the US map wasn't so formidable and it gave her a good beginning base for the general shape of the US.  It also changed her attitude about drawing it.  Once up in the Challenge levels they will be able to draw all the states inside the map...but for now, this is a good starting place for us to familiarize ourselves with drawing the US map for cycle 3.  I would encourage you to help break down the US map for your kids if they are younger, instead of just having them outline the map only.  It will make it much more memorable for them to free hand it later on.  Think "blobbing" the US, similar to what we teach when we "blob" the World map.

I definitely plan to have my daughter outline the US map as well, don't get me wrong.  I think outlining the map is definitely needed and beneficial.  I believe using a combination of both free handing with shapes like above and outlining will be helpful though.  As she sees the four sections broken down and begins to learn the states and capitals, it will be easier for me to give her reference points based on her imagined drawings.  I imagine this would be even more true for younger children that are abecedarian or apprentice age.  For example, you could say "Where on the map is New York"?  Your younger child may have no clue initially but you could say "It's inside the snail's body"...or "Where is Florida"?  "It's Pinocchio's nose"!  They would much easier find it, then to explain it's in the North on the East Coast, or the South on the East Coast- this would be especially true for younger kids who are challenged to remember left from right and east from west!

Just another way to use our imaginations to learn something new in the spirit of classically creative!

Leave a comment if your child comes up with some of their own imagined shapes to draw the US Map!  I'd love to hear them! 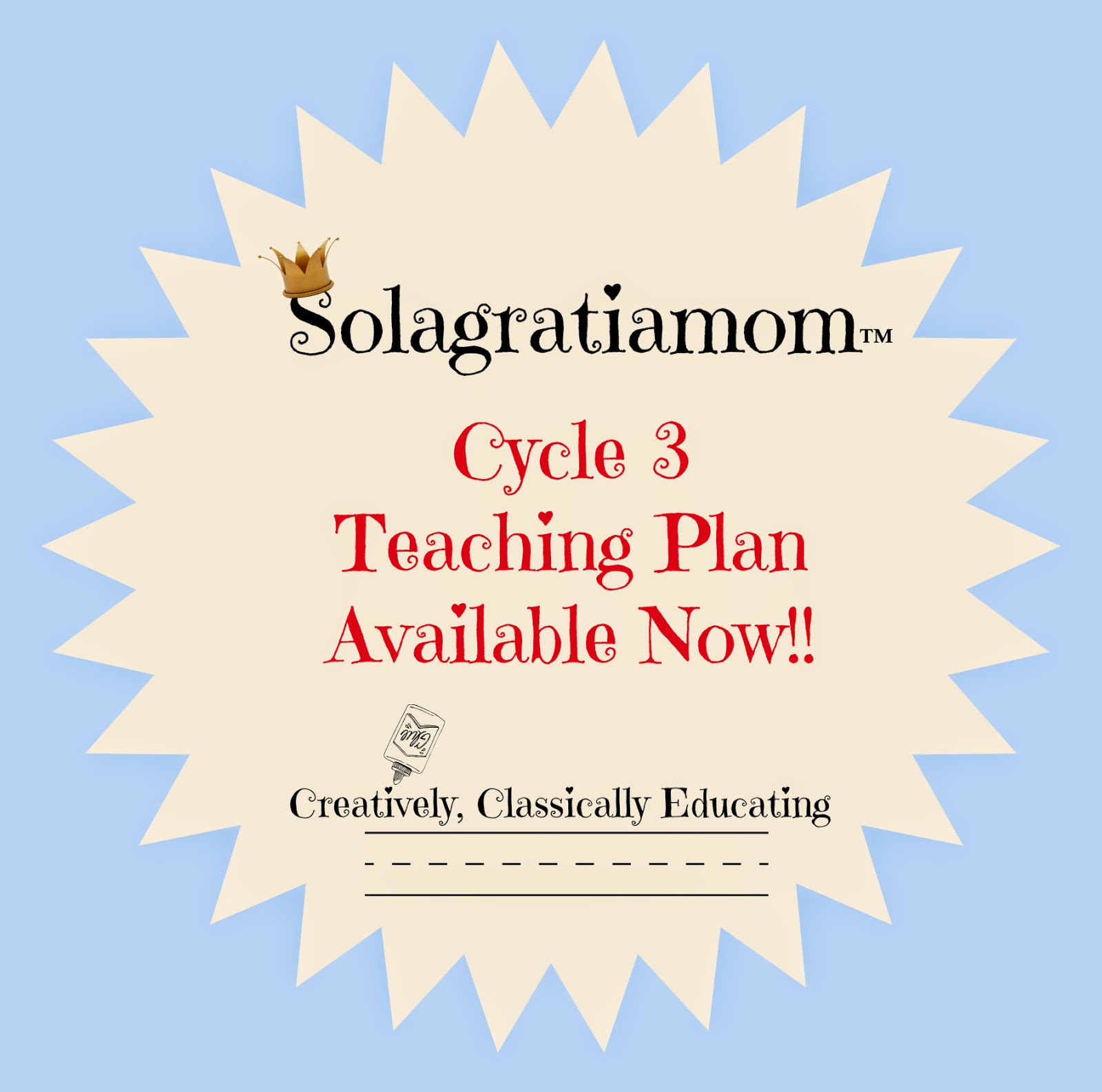