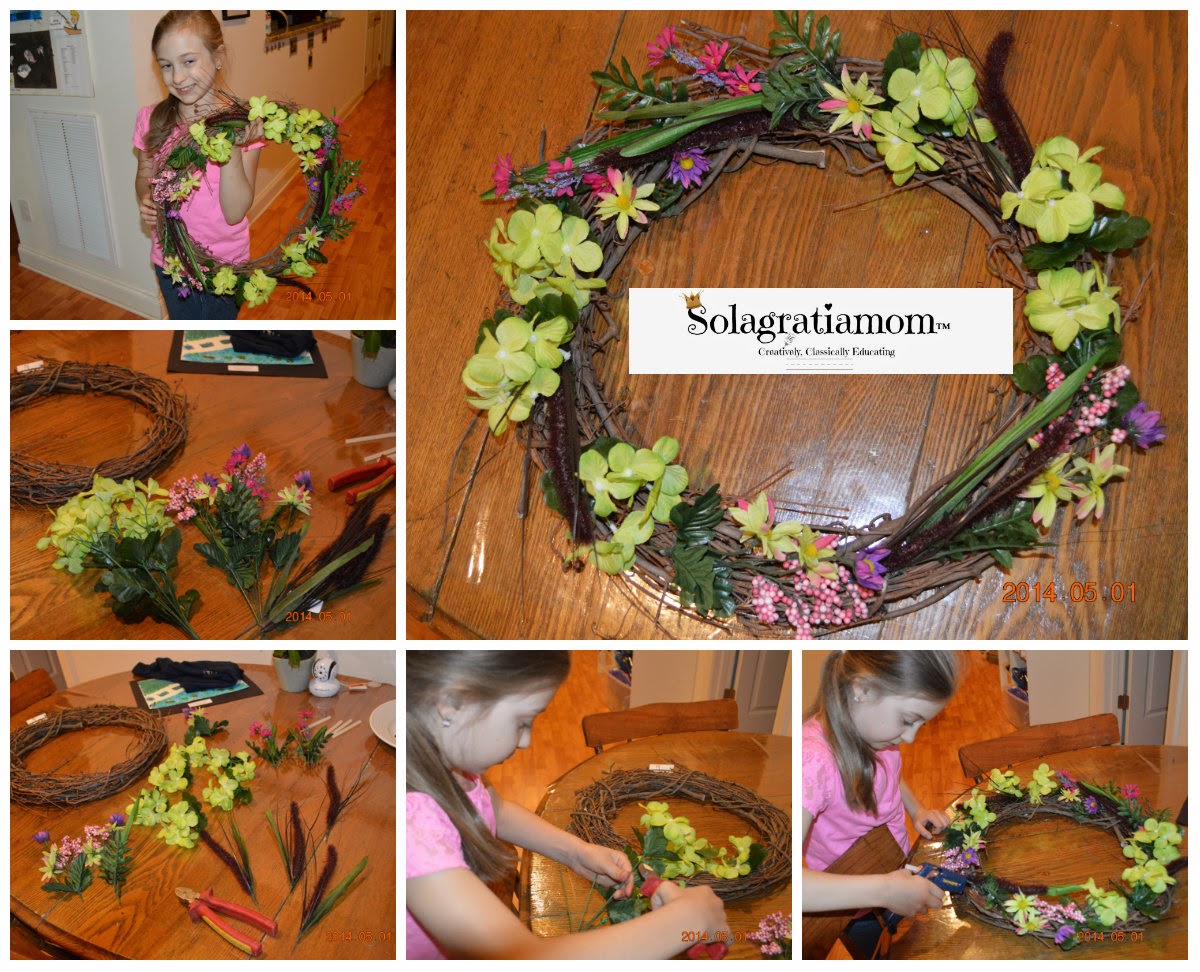 Math in making a wreath:

I broke this task into six parts for the girls:

Cost
So first we looked up several types of wreaths on Etsy and made note of how much they cost.  The girls couldn't believe how expensive they were to buy.  We then set out to the local A.C. Moore and Dollar Store.  We looked at how much it cost for the various flowers, wreaths bases and types of greenery that were for sale.  It became clear to the girls exactly why those wreaths we looked up on Etsy, were "expensive".  We added up how much it cost us when we were done and figured out the profit that might be made from selling a wreath.

Base
I explained to the girls about how to decide on the base and what types of bases work best for the project they had in mind.  We went with the grapevine wreath because it works well to hot glue flowers on, looks natural and is inexpensive.

Primary Color and Harmonizing Colors
Next I helped them pick out and coordinate colors.  I told them that they first needed to pick their main color and then they picked complementary colors to harmonize.  Some of the flowers already helped them with coordinating as it had a main color with a contrasting center color.  I showed them a variety of options and helped guide them in what matched and harmonized well and what didn't.  We talked about color harmony in more detail as I showed them something that did and something that didn't harmonize and I had them figure out why it did or didn't harmonize, helping them think through the concept.

Visual Interest
Lastly, we talked about adding visual interest and contrast.  I explained that contrasting colors generally are considered those that are found on the opposite side of the color wheel.  So the girls each picked out something that gave that effect - they chose cat tails and butterflies.  They were visually interesting because they didn't look anything like a flower - butterflies are not in the plant kingdom, and the cat tails had soft fuzzy plumes with grassy blades all around sticking out to create further interest.  These would both add a nice element and fill out their wreaths.

Assembly
Once we got home we spread out their chosen flowers, cat tails, butterflies and the grapevine wreath base.  We got a pair of wire cutters and then began cutting each flower from the pick, so we could arrange and glue them.  We talked about symmetry, which we had worked on earlier this year in math.  We discussed how symmetry would be important in determining the placement and spacing for our flowers.  So after we cut each one off the pick, we laid them out and counted how many of each we had.  This helped us determine in what sort of style they would look best laid out on the wreath.  For example, one girl had 8 main flowers.  We talked about how we could lay them out spaced singly around the entire wreath and place our harmony colored flowers between with some contrasting picks throughout or we could place them two together at a time and have 4 clusters around the wreath, allowing for larger spaces to place our harmonizing colored flowers in between.  Once that was determined then we laid our harmonizing flowers in between and added the contrasting picks of cat tails where we needed visual interest and to fill out the wreath.  Once everything was laid out on the wreath as they liked it, then the girls began to hot glue them on, removing them one at a time from where they were placed on the wreath and then placing them back once glued, in order to not disturb the design. 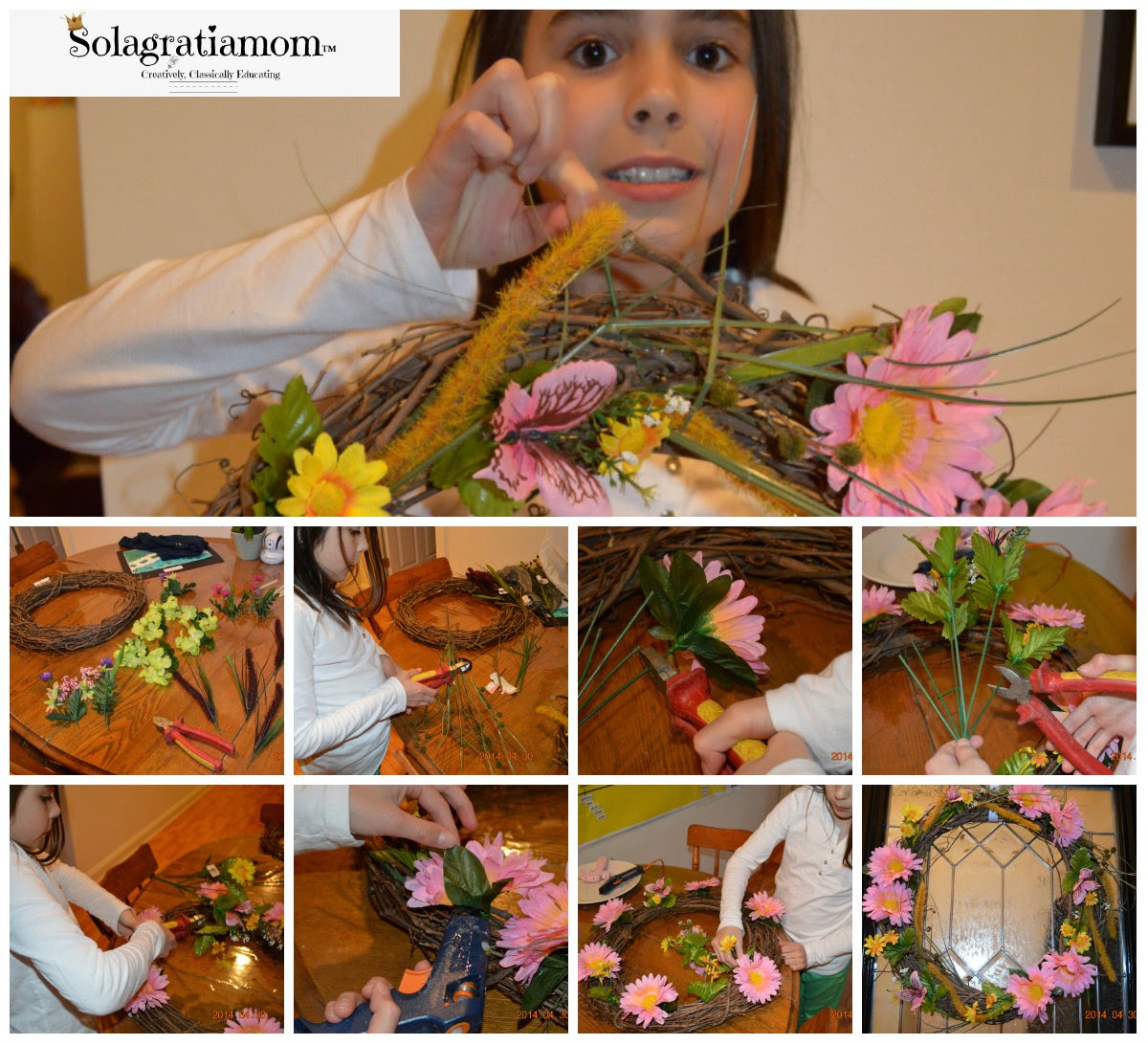 Mother's Day is just around the corner, this would be a great project to do together with your daughter(s)!

They did a great job and really enjoyed making them.  They said they wanted to start a "business" making and selling them…so look out!  haha