I missed some of the classes (though my daughter attended) -so the wonderful Mom who ran the Astronomy class was kind enough to do a "guest blog" for me on the final classes...I didn't want to leave everyone hanging as to how we finished up the summer class!  Thank you Nancy!!!  Unfortunately, the bummer is that I don't have pictures except for the final week's class!  If I get some I can use I will add them in at a later date - so check back since this pertains to the coming Cycle 2 Astronomy year with CC!

After being off for two weeks to celebrate the 4th of July holiday, we came together again to cover Jupiter and Space Rocks! First we played Pictionary with team members trying to guess the new vocabulary from  each other’s drawings. This was a fun way to learn our new vocab and create a visual memory peg to represent it!

We then got busy on our projects!

Planets: We mixed paints to make a rusty red and painted our salt dough Mars. Our terrestrial planets are now finished! Yeah! The gaseous planets would prove to be quite challenging to create… Styrofoam balls proved to be too expensive for a group our size. So, to make Jupiter we picked a rock from outside for the rocky core and covered it with pillow foam. This was not staying together well enough on it’s own, so we wrapped it in masking tape and then painted it with homemade puffy paint (equal parts glue and shaving cream). We added brown to make swirls and ended up with an awesome light weight gaseous planet! We set the planets in old egg cartons to dry (took a couple of days to fully set.)

Hurricane Tube: Because Jupiter’s Great Red Spot is like a hurricane on earth, we made a hurricane in a bottle to see what that might look like. We filled a water bottle with water and inverted another, taping them together. Swirling the water, they children observed  a hurricane shaped funnel… the little ones especially enjoyed this!

Planet Size Activity: Using salt dough each child was assigned a planet to make according to the scale in the Apologia Astronomy Notebooking Journal. We lined up the planets on the kitchen table and saw how big Jupiter really looked compared to the others… then the fun part! The kids smooshed together all of the planets, EXCEPT for Jupiter, and were amazed to observe that Jupiter was even larger than all the other planets combined.

Scale Model Solar System: This project helped the children see how far apart the planets really are to a fairly accurate scale. We used the chart in the Apologia Astronomy book, but modified this project by using the children as the planets lined up alongside our very quiet street! Each foot represented 3.6 million miles. We placed the first child as Mercury at the top of our street and then each child paced to correct # of feet to the next planet (according to the scale given in the book.) The five little siblings ages 15 months to 5yo even gathered between Mars and Jupiter to form the asteroid belt- with an adult of course! The kids were amazed to see how close the first four planets were compared to the rest of our solar system!

Since the lesson on Saturn was relatively short, we combined two lessons this week. We started off playing our Jeopardy game with the new terms from the three chapters- there were so many new terms! Then on to our projects J

Make/Paint Uranus & Neptune: More gaseous planets! For Uranus & Neptune, we experimented using old tennis balls & squooshy water balls from the dollar store. We covered them with homemade blue puffy paint (again, equal parts glue and shaving cream). It worked great initially, but as they dried the soft surfaces of the balls absorbed much of the paint and we lost the puffy exterior- I definitely preferred how Jupiter turned out! We made Neptune a more intense shade of blue to differentiate the two.

Make a Centaur Rocket: We altered the instructions in the book because I had only ONE film canister- they’re hard to come by these days J. Each child made their own rocket using a toilet paper tube and covered it with construction paper and some added legs with colored foam. They named their rockets and lined them up on our drive way. The BEST part was when we launched them one at a time on our driveway while we having a snack! The “fuel”  was just warm water and an ¼ Alka Seltzer tablet. As the children observed the launches, they made hypotheses about how the differences in rocket construction may have impacted how high they shot up.  This was a fun learning experience- loved it!

Write and Act out  Play about the Discovery of Uranus: The older girls wrote a play including roles for all the children while the others made rockets. After our rocket launch, the kids practiced their roles and grabbed props from around our house. They performed a wonderful play to conclude our morning together. It was neat seeing them all work together to pull this off- it was a bit of a challenge in such a short time and with so many children, bur well worth remembering the “Eureka!” moment!

This is an incredibly fun lesson with so many activities you can add- I found a few online that I couldn’t pass up!

We played a really fun review game called “Bozo’s Grand Prize Game”  from the Bozo Show that I watched when I was little. I lined up six plastic strawberry picking buckets (or gallon sized ice cream containers) behind a line (see stock image for reference). Each team would answer a question after throwing a ping pong ball into a plastic bucket. The first one is easy to reach, but it gets harder as they are further away! They kept tossing the balls into the buckets and answering questions until they missed one or the other. This combines physical and mental skills and doing it in teams kept everyone interested. Team members took turns tossing the ball, but could work together to answer the questions!  They LOVED this!

Make an Astrometer- For this project, I printed four rectangles on cardstock and had each child cut out the squares. Instead of cling wrap, I cut page protectors in four lengths for layering and they taped them on ( I used 1 ½ page protectors per astrometer.) They wrote the numbers 1,2,3 and 4 alongside the corresponding window that had that number of layers. They could use these at night to find the brightest stars in the sky!

Create a Constellation Planetarium- I wanted the children to be able to make numerous constellations for viewing, so I adapted this project from the book a bit. Each family received one large round oatmeal container with the bottom removed. On black cardstock circles, the children marked the stars in a constellation (ie the Big Dipper, Orion’s Belt, etc…) with a silver sharpie or white pencil. Then they whole punched them, and made as many constellations as they wanted. I cut out a large circle in the lid so it would secure the cardstock, but not obstruct the holes. They ran into a dark room to shine a flashlight through their homemade planetariums to see the stars on the wall! They really enjoyed this!

Marshmallow Constellations: I placed black construction paper skies on the floor and a bowl of marshmallows and toothpicks next to each one. I laid out example constellation printouts: http://mrshomeec.blogspot.com/2010/09/preschool-lesson-space.html “lacing cards”, and the children loved making edible constellations! The marshmallows were even gluten free! Simple. Fun. Effective. J

After an opening prayer of thanksgiving for a wonderful summer learning experience, we jumped into student presentations! Each child had chosen a topic they were interested in and gave a 3-5 minute presentation to the group. This served as an excellent review for everyone! We had quite a variety of presentations- in addition to traditional presentations on a variety of topics, we had original poetry, a homemade comet (snow cone ice packed with rocks), and even a witty and entertaining puppet show! Some children teamed up and presented together- this may have been my favorite part of the whole summer J. 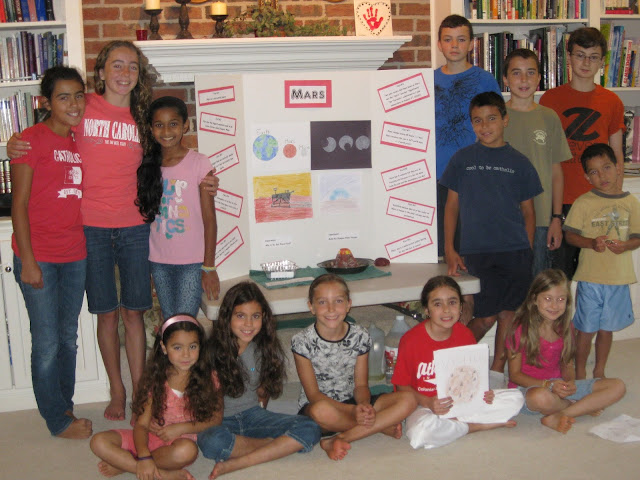 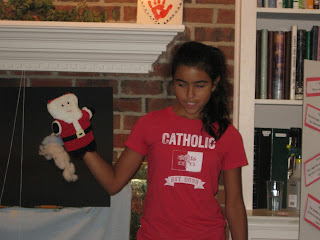 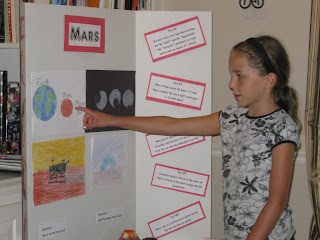 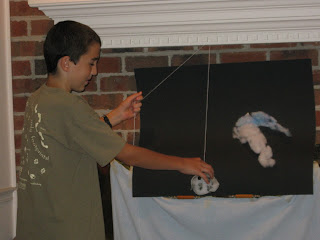 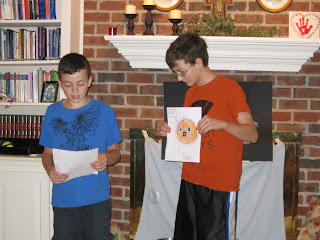 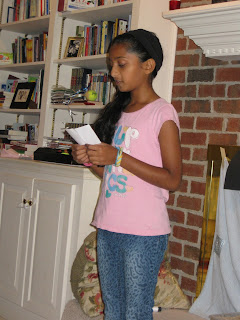 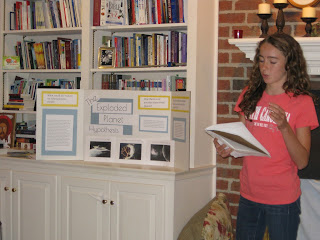 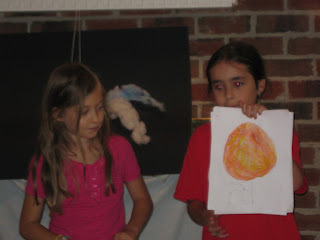 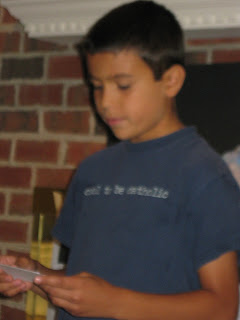 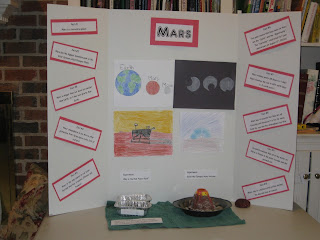 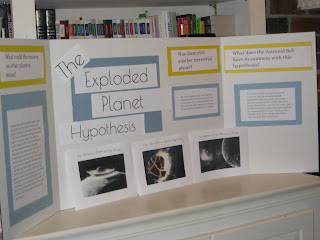 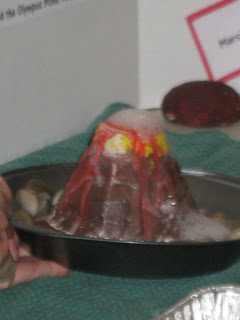 We were not done yet, though…there were still a few projects left to complete our study!

Build  Model Space Station: Each team chose one of the three countries currently represented on the International Space Station as their own. Then we sent the “Americans” and “Russians” outside first to begin construction on our own version of the international space station. The “Italians” would work on other projects before relieving one of the other teams. We had picked up a bunch of free boxes from BJ’s, in addition to a large refrigerator size box and smaller containers for them to use and with masking tape created a huge model they could actually sit inside. They even incorporated a cool “food” hatch opening and computer inside. 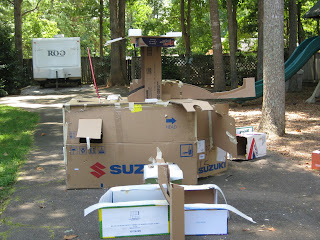 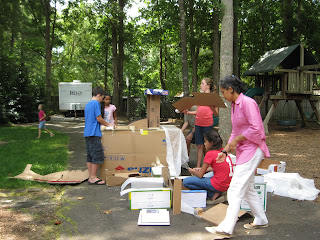 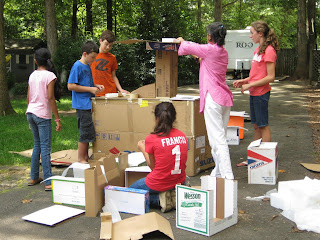 Make Saturn: We still needed to make Saturn! We searched a local tennis court for discarded tennis balls and were delighted to find over 20! We cut each ball in half with a serrated knife ahead of time and glued each half onto an old CD. In class the children painted the tennis balls- done with all the planets! Woo hoo! 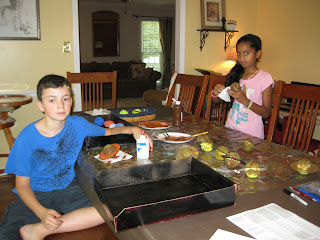 Assemble Solar System Boxes: Now that we had diligently made all of the planets, we needed a durable place to store them! We found large flat cardboard box trays (again at BJ’s) and spray painted them black. The planets were hot glued in the proper order and small labels were added for identification. Some wanted to include Pluto- so they added a white golf ball since Pluto in made of ice and rock. This was the perfect way to display all our their planets and wrap up our Solar System! 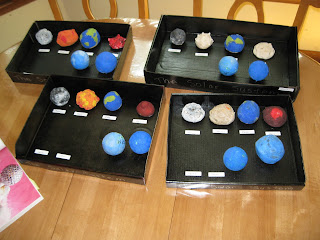 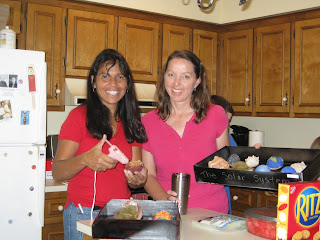 Make Ice cream: Our final order of business was to make some homemade ice cream in honor of the former planet Pluto! We followed the directions in the Apologia book for vanilla ice cream in zip-lock baggies- delicious! Some of the ice cream did not firm up as well others, so we gave them a straw and they drank their ice cream with a straw- just like they would have to on the Space Station! I love how that little detail fell right into place! 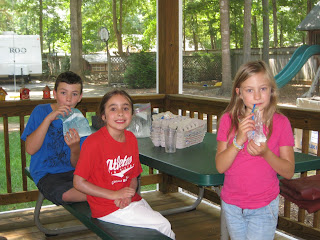 Nancy did a fantastic job and the final presentation of the planets was for sure - Wonderful Wednesdays worthy!  LOL  :)  I couldn't have done better myself!  Thanks for having us over this summer and doing all the work!!!!   It was so nice to sit back and be an onlooker for the summer!
Posted by Unknown at Thursday, August 15, 2013