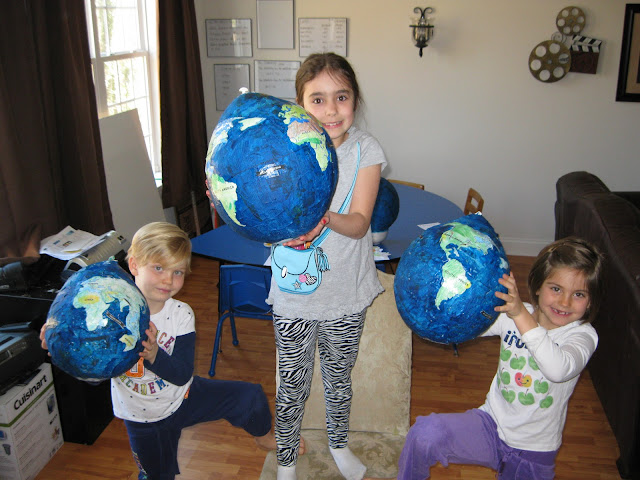 I wanted to do a final project for Wonderful Wednesdays that would help pull the final week of Science together for the kids.  I figured a world globe would be a good ending project.  Little did I know the magnitude of the project!  Now I've done some big projects this year (let us not forget making 28 volcanoes the night before WW back on Week 16!)....however, this one seemed to trump them all.  I think I underestimated the amount of time it would take and it certainly did take a lot of time!  It all started out easy enough...we got together on Tuesday (we decided it would be Terrific Tuesday!) and we paper mache'd the globes and then set them to dry till the next day.  I figured surely that would be the only piece that would require extra time and I planned for it.  Well.... 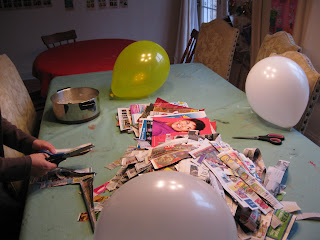 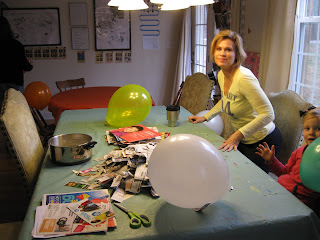 I used helium grade balloons because I figured they would be thick enough to handle the paper mache' without breaking (found that lesson out the hard way on a previous project we won't discuss...LOL).  Hindsight I would have used a punch balloon perhaps, it would have been more round and even thicker.  We didn't have any problems with the helium balloons, they stayed in tact and didn't pop.  We probably could have blown them up a little less in size though.  However, they worked fine as we did them.  It was a final day for the table cloth though!  The paper mache' project did it in!  We threw it away at the end!  It served us well through 24 weeks of messy projects! 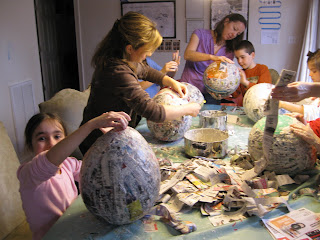 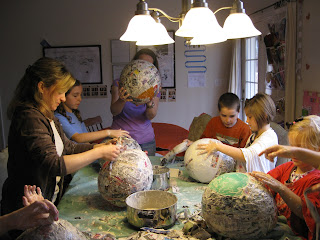 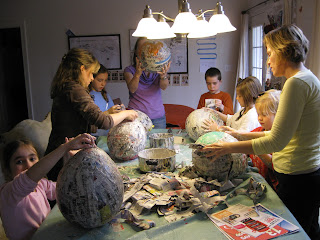 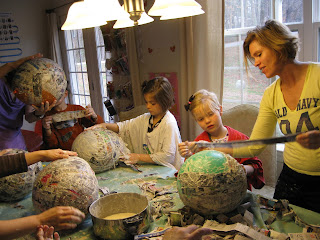 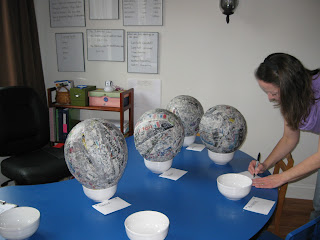 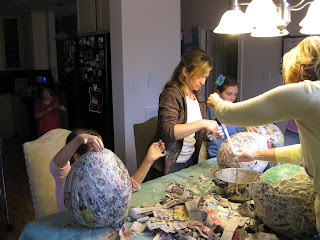 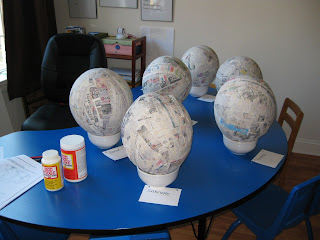 We left them to dry in bowls (I flipped them before bed that night so the bottom would have a chance to dry as well).  The other thing I learned is that you want to do at least 3 layers, maybe even 4 would be good.  We ended up having some crack because it wasn't paper mache'd thick enough and I had to make repairs. 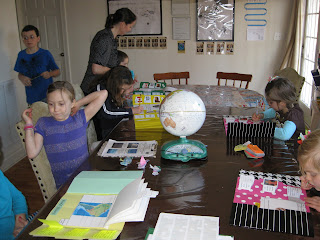 Next we got together on our regular Wonderful Wednesdays.  We did our last week of the lapbooks, introducing the new weeks material and then I had a few activities for the kids to help them understand the importance of the markings on the globe.  The first thing I did was give them all blank note cards, except one child got a note card with an X on it.  I had him be the "Navigator" and then go off away from the group and describe where the others should put their X on their note card in 90 seconds.  Afterwards we discussed why it was difficult and how it could have been easier if we had quadrants or even lines on the paper to be able to give more specific location descriptions.  The next thing we did was have a ball with an X on it and then see if the person holding it could describe where the X was to the other kids.  Again, difficult without more specific parameters.  Next activity we did was pick an actual existing physical location (Raleigh, NC) and then have the kids pretend they needed to have their Mom come get them but she was not in the country, so how would they describe where they were so she could find them?  Once they struggled with that for a bit, we gave them the actual globe and had them use the markings on the globe starting with the Northern or Southern Hemisphere, then West or East of the Prime Meridian and then look at the degrees to find the exact location to give to their Mom to pick them up.  It got significantly easier once they were allowed to use those parameters. 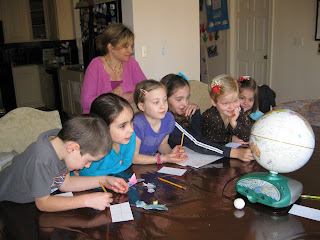 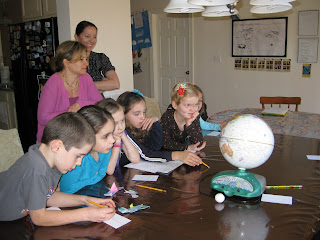 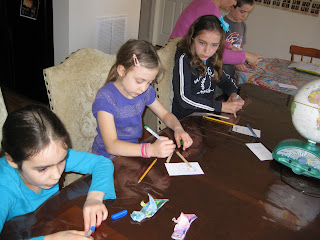 Next we took popsicle sticks and hot glued them then wrote latitude on one and longitude on the other.  We said "latitude has flatitude and longitudinal lines rise like porcupines" to help remember it.  This and the ideas for the activities I adapted from http://www.teacherspayteachers.com/Product/Longitude-and-Latitude. 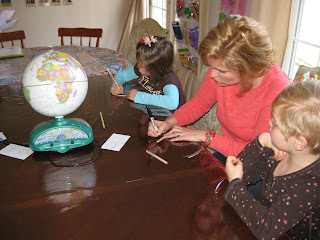 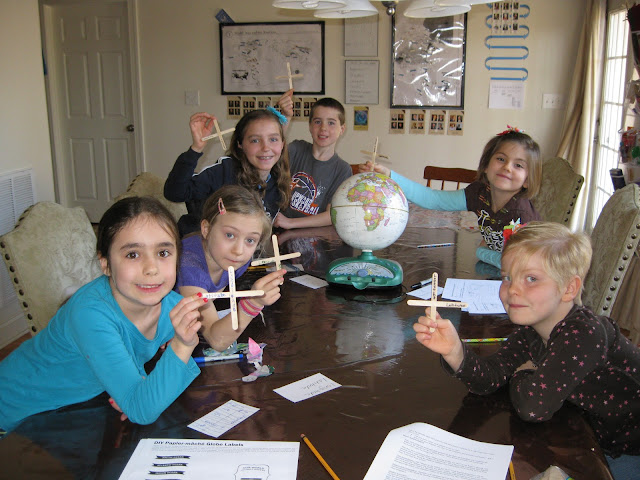 Next we started coloring the continent maps that we were going to cut out and Mod Podge to our globe.  Mistake!  We should have first painted the globes once everyone got there and then done our introduction for that day's material and the lapbooks and THEN colored and cut out the continents.  We were using tempura paints and they take FOREVER to dry!  My bad - I forgot how long they take to dry!!  So....by the time we painted them and played a review game, our globes were still not dry!  So....we ended up having a day three planned for the next day - Thankful Thursdays - because we were all going to be thankful if we could get this project finally done!!  The continents document for adhering to the globe I got from this site....  Continents Document 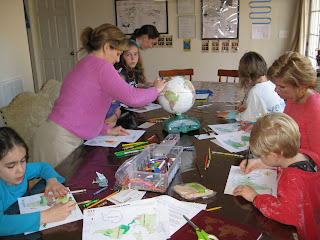 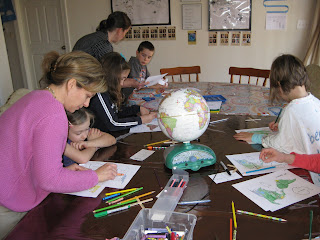 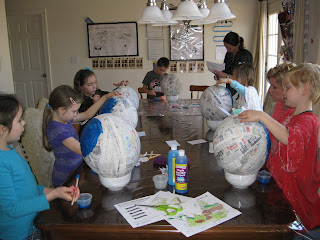 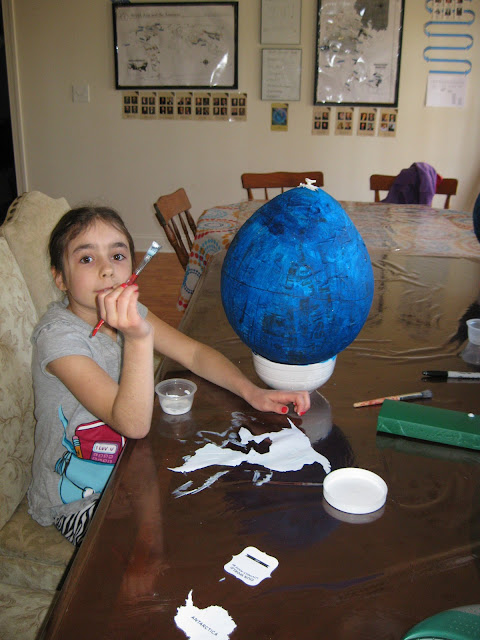 So here we are starting day 3!  We were down to a skeleton crew and we did get a little punchy at the end!  However, we made sure to end our day having pie for PI Day! 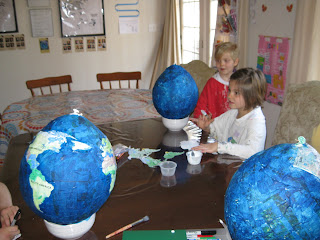 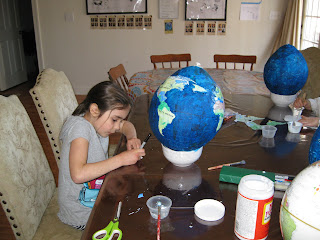 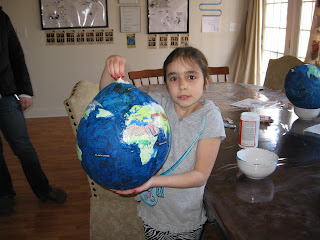 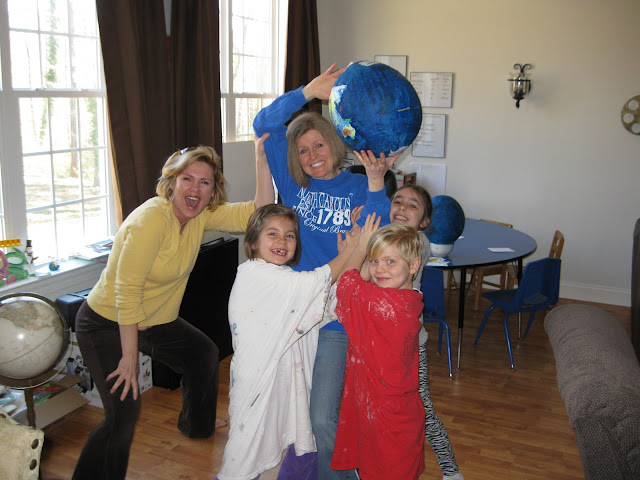 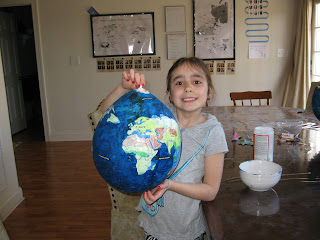 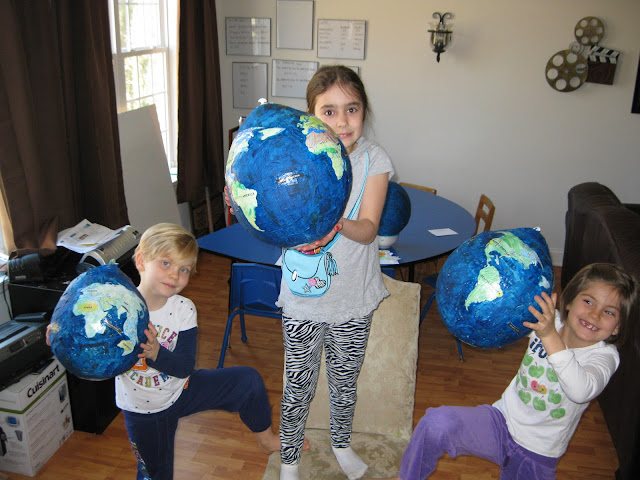