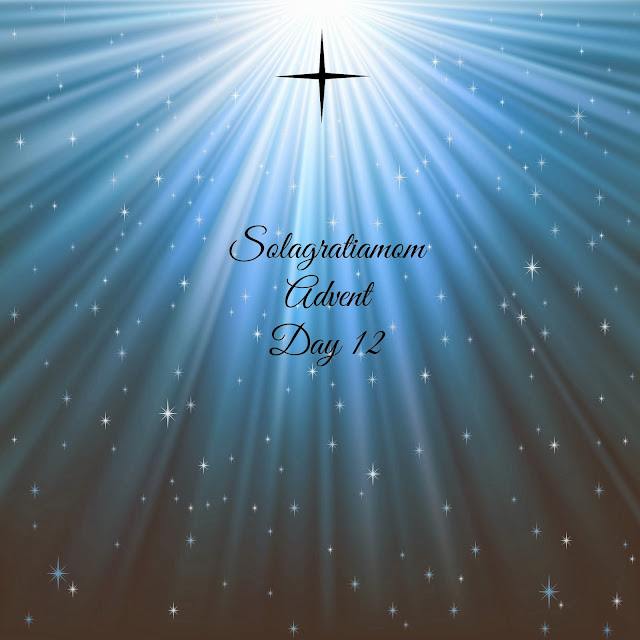 One of the blessings of being in a Community is just that - Community - enjoying shared time together in this journey called homeschool!  What better way for the kids to enjoy that Community outside of CC than to have a Christmas Party....so we did! 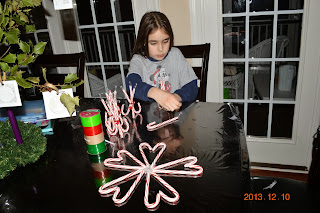 First things first - we made our place holders.  We took candy canes and rubber banded them together and tied a curled ribbon to make them become our holder for the cards we made.  The kids could take them home after the party along with their gifts. 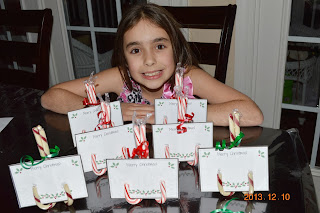 Then I began working on the treats.  I made miniature brownies, turned them upside down, added whipped cream, strawberry and another dot of whipped cream and we had santa hats!  I also cut up fruit and arranged it in a christmas dish. 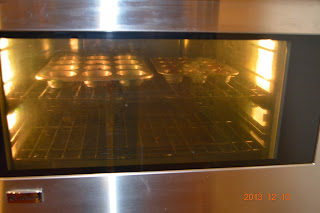 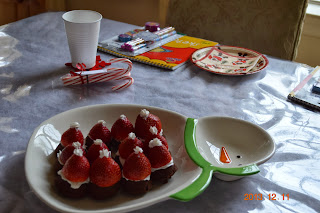 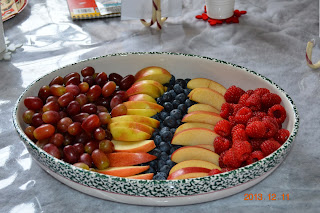 We then worked on our place settings.  We put the gifts at each setting (sketch pad and pencil/eraser set for each child), our candy cane place holders we made, plates with napkins, snow flake coasters and a white cup that we drew eyes and a carrot nose on to look like a snowman. 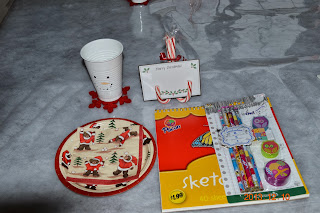 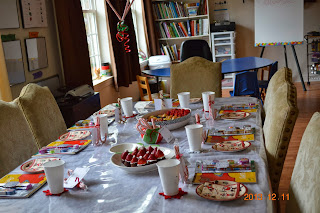 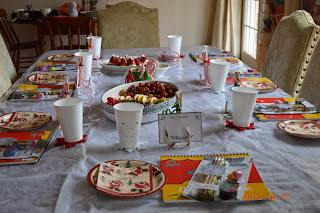 We then began setting up the supplies for the crafts and games.  Being that we were doing a party with our CC friends from class I had planned to play a Review Game as part of our games (I know, I can't help it - it's the Tutor in me!).  However, I made sure the game would be fun and relevant to winter! 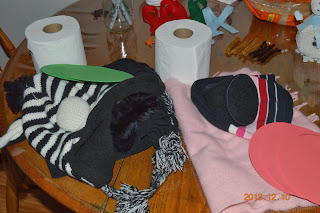 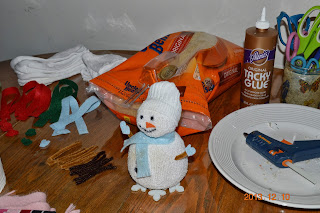 So for the review game supplies we set up, we used hats, gloves, ear muffs, scarf, 3 buttons and toilet paper.  The game was to "build a snowman".
There were a couple crafts planned for the kids as well.  The first one was to build a snowman out of a tube sock with rice and embellishments.  So the supplies were set out for that activity along with the supplies to make puff paint snowman scenes with pastels and shaving cream/glue.  They all came out so good!  The kids did awesome and they were really fun.  Their snowmen were so cute! 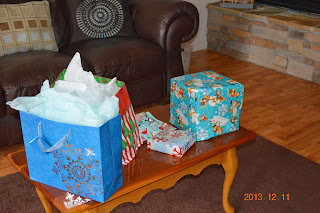 The last activity planned was a white elephant gift exchange game.  There were two really nice gifts that were brought and it was funny to watch the kids stealing throughout the game to keep trying to be the person who ended up with one of these two gifts.  :)

Snowman Review Game:  The kids were divided into two teams and for each correct team answer, they earned a piece of their snowman supplies.  Once they had earned all their gear through answering their review questions correctly, they then had to race the other team to see who could build their snowman first - that was the team that won the game.  The kids had a blast!  Once they finished the game and building their snowmen, it became a toilet paper fight - which was even more fun I think! 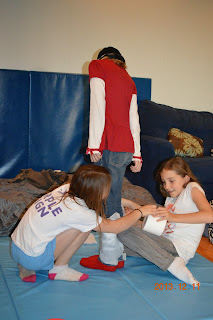 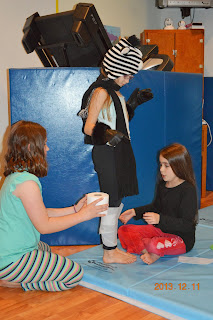 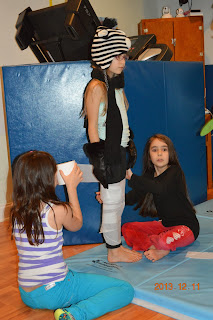 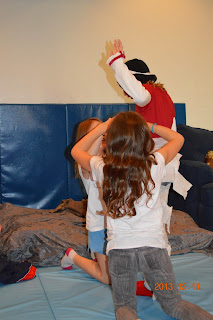 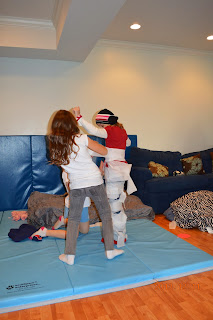 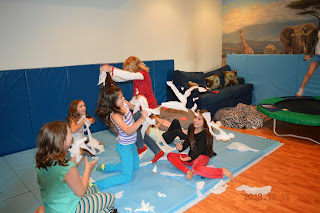 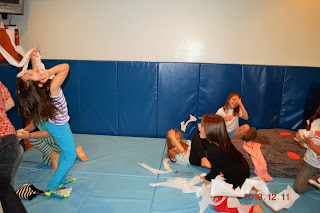 Build a Snowman:  First you take a tube sock and cut off the top half where the "ribbed" area is (about 1/4 of the top of the sock).  You lay that aside.  Then you flip the sock inside out to get the "fuzzy" side out and then begin filling it with rice.  Once it's 3/4+ full with rice and nice and "fat" you can take a rubber band and close the top securely.  Then take a second rubber band and squeeze the filled sock till you have a head and a body - place the rubber band loosely there (tight enough to keep the shape but not too tight or the head becomes wobbly).  Then you take the top 1/4 of the tube sock you cut off at the beginning and rubber band that together on the cut side.  Then flip the sock inside out and place it on the snowman's head as a hat.  Now you can begin to embellish.  We used black permanent marker to make the eyes, mouth and buttons.  We used pipe cleaners for arms cut short, felt cut into a carrot nose, gloves and a scarf.  Lastly we sprayed them with glitter glue. 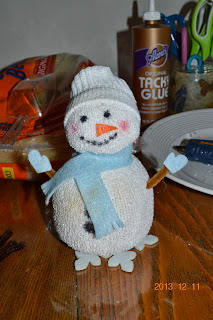 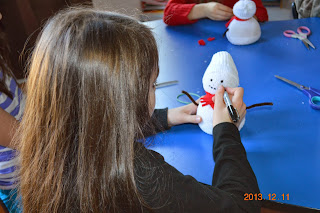 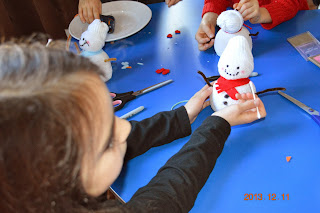 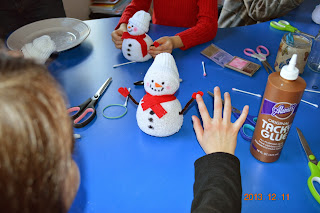 I think Sarah's came out cuter than mine - LOL!  :)  Below is all the girl's snowmen - LOVE THEM! 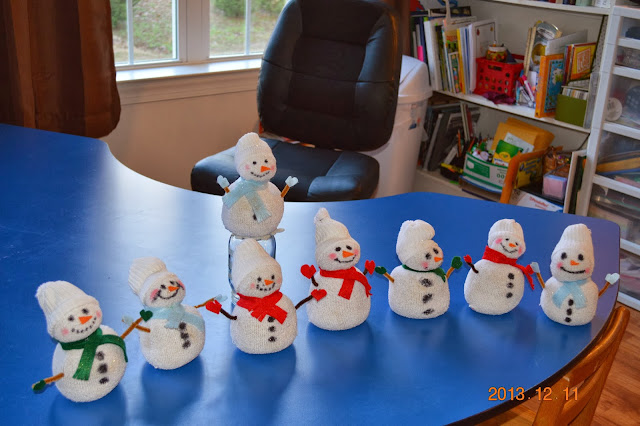 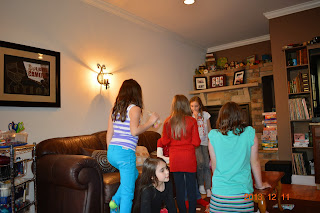 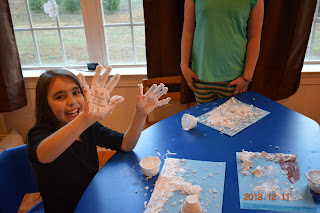 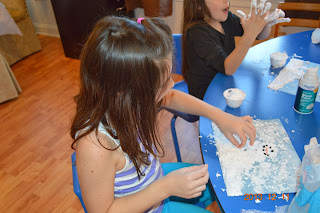 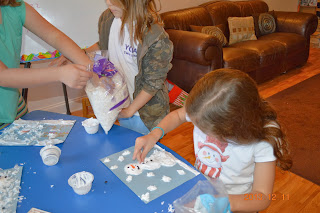 What a blessed time with a great group of young ladies!